Vasarely is regarded as the father of Op-Art. During the 1960’s and 70’s his optical images became part of the popular culture, having a deep impact on art, architecture, and fashion.  After abandoning medicine, Vasarely went to the private Podolini-Volkmann Academy for traditional academic painting. In 1928/1929, he enrolled at Sándor Bortnyik's Műhely, then widely recognized as the center of Bauhaus studies in Budapest to study applied graphic art and typographic design. Victor Vasarely became a graphics designer and a poster artist during the 1930’s who combined patterns and organic images with each other. Vasarely left Hungary and settled in Paris in 1930 with his wife. working as a graphic artist and as a creative consultant at the advertising agencies Havas, Draeger and Devambez (1930-1935).

After the Second World War, he opened an atelier in Arcueil, a suburb some 10 kilometers from the center of Paris In 1961 he finally settled in Annet-sur-Marne. Over the next three decades, Vasarely developed his style of geometric abstract art, working in various materials but using a minimal number of forms and colours.

You can buy works by Victor Vasarely in our shop. 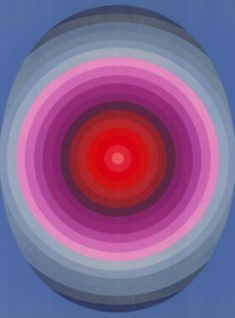 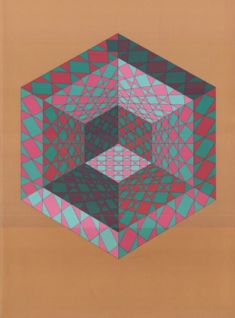