Tom Wesselmann's (1931-2004) pictures appeal to the observer's hedonism. His picture language is direct and clichéd. The series “Great American Nudes” that made Tom Wesselmann famous in the early 1960s is provoking and can be understood as an ironical allusion to the American dream of the female body. The image of the modern women as it is shown in glossy magazines is reduced to an anonymous nude – lasciviously sprawled, bronzy with tan lines and the perfect body, this is the focus of his work.

Pop Art won over sponsors and speculators at an early stage, among them the German industrialist Peter Ludwig who lent his name to the Museum Ludwig in Cologne. He bought the “Great American Nude #98” for his collection, a painting that is one of the main works in the collection of the museum. The oversized still life visualizes the phrase “sex sells”. Tom Wesselmann combines erect body parts like nipples and a face that is reduced except for the mouth, wide open in an orgasmic expression, with props of consumer culture that are easy to identify as Kleenex-tissues and a Sunkist-Orange, even with the brand names missing.

“If you see a travesty of the fall of man in Tom Wesselmann's pictures, Eva as the seductress, then the now 'natural fruit', the apple of paradise, gains life-giving qualities. Those forces are not 'innocent' in a pagan sense however, just as the breasts are metaphors for fertility; the consumption of the orange implies the use of the Kleenex-tissue. It's counterpart is the filter-tip of the cigarette.”

In the 1960s Tom Wesselmann began making other series which also elevate trivial motifs and reduce them to stereotypes such as the “Bedroom Paintings”, “Seascapes” and “Smokers”. The latter is a series he continued working on till the early 1980s, he sort of created always new variations of the same picture. A sensuously opened mouth in front of a white background, bright red lips and fingernails with cigarettes and wads of smoke that underline the sexual symbolism. A large-scale painting from the series “Smoker 1 (Mouth 12) is in the New York Museum of Modern Art (MoMA).

Beside Peter Ludwig Gunter Sachs was a further patron and collector of Tom Wesselmann, he also discovered the artist at an early stage. He had his tower apartment in St. Moritz - he moved there in 1969 – furnished by Tom Wesselmann, Andy Warhol, Roy Lichtenstein, Arman, César, Yves Klein and Allen Jones. The result is a piece of contemporary history and a document of the lifestyle of the 1960s.

You can buy works by Tom Wesselmann in our shop.

Judy trying on clothes, 1960 - AVAILABLE IN THE SHOP 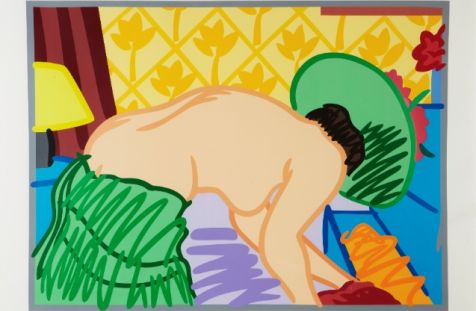 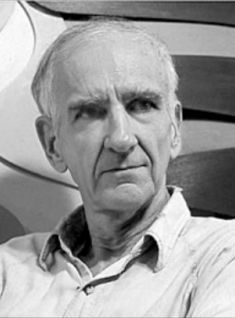