Roy Lichtestein is considered, alongside Andy Warhol, the most famous artist of the Pop-Art genre. His breakthrough came with the painting “Look Mickey” from 1961. In the same year, the Leo Castelli Gallery admitted him and soon later, Lichtenstein was so successful, he made a living solely from his art. Later in his work Roy Lichtenstein found back to his expressionist and surreal roots.

His early experiments in expressinistic and abstract painting were not successful, and in sheer desperation, Roy Lichtenstein decided to provoke the art world a little and started to paint popular comic figures such as Mickey Mouse and Donald Duck. He used comics strips from chewing gum wrappers at the beginning, but quickly moved on to large scale paintings. The style of comic strips became a great success for the artist.

Roy Lichtenstein challenged traditions of painting concerning content and technique. Everybody knows the thick black lines and surfaces filled with vivid colours and polka dots. Instead of continuous colour fields, Lichtenstein applied dots on the canvas. He copied the cost-effective technique which was used by the printing industry, and this industrial style of the printed comic became the characteristic feature of his paintings.

Roy Lichtenstein was awarded the Kyoto prize in 1995, one of the highest awards for merits in science and arts. He participated twice in the renowned art exhibition documenta in Kassel. Lichtenstein’s works have been exhibited in many important museums around the world and are present in countless collections. Currently, a comprehensive retrospective is touring the most important museum worldwide, including the National Gallery of Art in Washington DC, the Tate Modern in London and the Centre Pompidou in Paris.

You can buy works by Roy Lichtenstein in our shop.

Brushstroke, 1967 - AVAILABLE IN THE SHOP 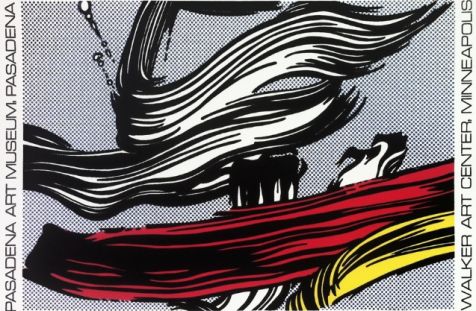 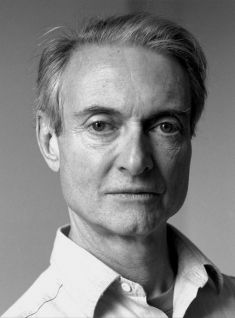 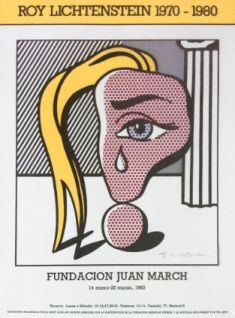