Leon Löwentraut was born in Kaiserslautern on February 15, 1998 and lives now in Düsseldorf. Inspired by his mother, he has been painting since the age of eight. Meanwhile, he is considered an insider tip in the art scene. He describes his art as "expressive-abstract". For his viewers he would like to give space for own interpretation. For him, painting and art are areas in which he can live it up . He likes to paint while he is listening to classic music at night. Then he can sink in the picture and also usually stops only when the picture is finished.

His large-format and expressive pictures have attracted the attention of collectors, gallery owners and curators. He has already had four national exhibitions in southern Germany, Hamburg and the Rhineland, as well as his first international exhibitions in London and in Asia. At his last exhibition in Singapore, his works were completely sold out within two hours during the vernissage. Other national and international exhibitions, among others in New York are also terminated the successes of his previous editions are extraordinary. All three previously released editions are sold out after only a few days or weeks. 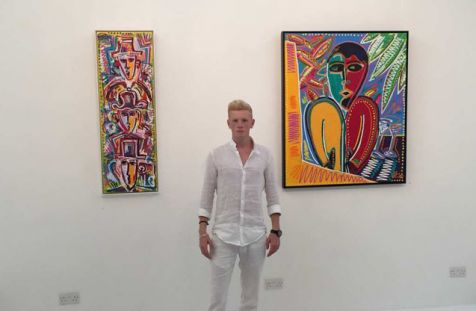