Daniel Spoerri (*1930) made a name for himself in art mainly with his “Tableaux pièges” (“snare pictures”). His work with food leftovers glued to tabletops is the artist’s trademark. When Spoerri collected metal parts for his friend and artist Jean Tinguely in 1960, he had the idea of gluing those items onto a fixed surface and tilting it vertically. This idea was the birth of the “tableaux-pièges” that immortalize the remnants of a meal in relief. Some of the pieces feature hundreds of table utensils.

The variation of layers of perception and reality are an important aspect of his creative work. Part of it is the distortion of food – Spoerri is considered the inventor of “Eat Art”. Food and cooking are a central part of his life in general and it is a matter of course for Spoerri to question eating habits, sensual perceptions and traditions. During his time as a professor and tutor Spoerri hosted exhibitions and banquets at which he served “Eat Art” with the help of his artist friends (Bernhard Luginbühl, Dieter Roth, Arman, César, Niki de Saint-Phalle). The “Restaurant Spoerri” and the associated “Eat Art Gallery”, which he opened in Düsseldorf in 1968, made Spoerri the founder of Eat Art.

His art includes object art and process art; the glued-on moment is only an aspect of the whole cycle that comprises life and death, decay and rebirth. In the 1980s, acquisitions by international museums and international retrospectives consolidated Spoerri’s position as one of the central figures of European post-war art. After the establishment of the artist’s garden “Il Giardino di Daniel Spoerri” in Tuscany in 1977, he increasingly made his assemblages from bronze. In this garden he also exhibited his artist friends’ works. The garden, which hosts around 100 installations by roughly 40 artists, is open for visitors.

The “Prillwitzer Idole”, a series of large bronze statues he began in 2005, is especially noteworthy. Spoerri’s preoccupation with diet, food and its preparation lead to the creation of a series of “bread dough objects”. He baked bread dough together with various objects; the dough swells from flat-irons, tractor seats and typewriters. In 2007 Spoerri rediscovered Vienna, where he held a position as visiting professor in the 1980s. In 2008 he transferred two properties in Hadersdorf am Kamp, in Lower Austria at the Danube, into a charitable foundation. The properties go under the name “Eat Art & Ab Art” and house restaurant, event and exhibition spaces.

Spoerri was born as Daniel Isaak Feinstein (Spoerri is his uncle’s name) in Galati (Rumania) in 1930. Persecuted by the Nazis, he flew to Switzerland with his Swiss mother, where he began working as a dancer at the Bern Opera (1954-57) before he worked as a director, actor and set designer in the theatre. The artist has been living in Seggiano, Italy, since 1998. There he continues working on his synthesis of the arts “Il Giardino di Daniel Spoerri”.

You can buy artworks by Daniel Spoerri in our shop. 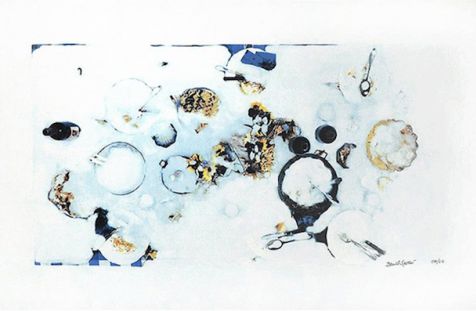 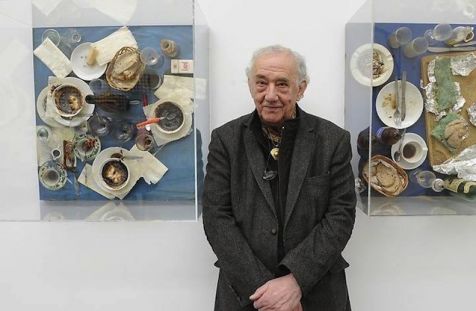 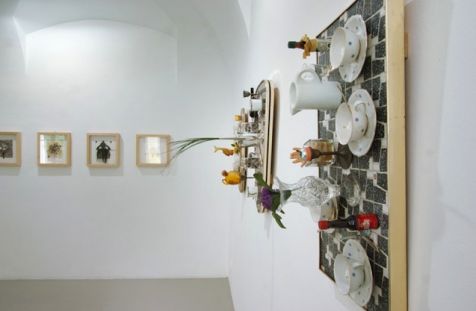