Chuck Close (*1940, Monroe, USA) created large photorealistic paintings in which he blurred the boundaries between photography and painting. He is best known for the large portraits he painted based on photographs.

His grave learning disability and other diseases made him an underperformer at school. He was also barred from participating in PE, but found comfort and motivation in art. His parents supported his creativity, the early death of his father and his mother's cancer were a hard blow for 11-year-old Close. He got ill soon afterwards, a kidney infection forced him to stay in bed for almost a year.  These strokes of faith only strengthened Close's love for art and especially painting. When he was 14 years old, he visited a Jackson Pollock exhibition, whose style impressed him very much and – as he recalled later – awakened his wish to become an artist himself.

He was a student at the University of Washington, Seattle, and later graduated with an MFA from Yale University (1960-64). Deeply rooted in abstract art, Close radically changed his style to photorealism, the art form that should become his trademark. After briefly experimenting with figurative compositions, Close began to transfer black-and-white photographs of female nudes onto canvas. He soon distanced himself from this approach and painted large black-and-white portraits on canvas, also copied from photographs. He never deviated from the original in his work. Close maintained his black-and-white style until 1970, when he increasingly started using colour again. In the 1980s he experimented with handmade paper and created images composed from giant polaroids.

With his photorealistic works Close was a constant in the American art scene of the 1960s. One of his most famous works from this time is his portrait of an equally promising artistic talent, the composer Philip Glass. He added portrait of numerous famous personages to his oeuvre, among them the choreographer Merce Cunningham and the past president Bill Clinton.

His works have been exhibited by renowned galleries and museums since the 1970s. Close is one of the most famous contemporary artist and was awarded the Medal of Arts by the then president Bill Clinton. He is also a member of the American Academy of Arts and Letters. Chuck Close's works are represented in the most eminent private and public collections such as the Whitey, the Solomon R. Guggenheim Museum New York, the Staatliche Museen Berlin, the Museum of Modern Art New York, the Tate Gallery London, the National Portrait Gallery Washington D.C., the Museum of American Art New York, the Kunsthaus Zürich, the Essl Museum Klosterneuburg Austria, the Louisiana Museum of Modern Art Humlebaek and many others.

Close has been partly paralysed and bound to a wheelchair since 1988, but has continued painting with a paintbrush fastened to his wrist and forearm. His oeuvre includes graphic reproduction, photography and since very recently also tapestried based on polaroids. The artist works and lives in New York City and Long Island, New York.

You can buy artworks by Chuck Close in our shop.

Chuck Close in 1969 with his portrait of Philip Glass.
photo by PaceWildenstein 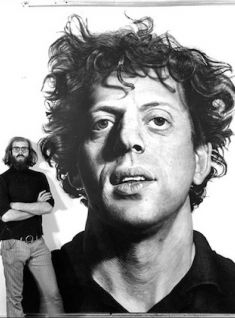 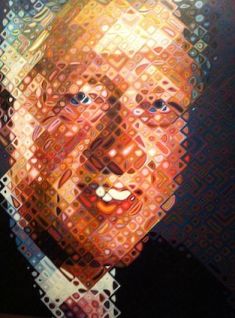 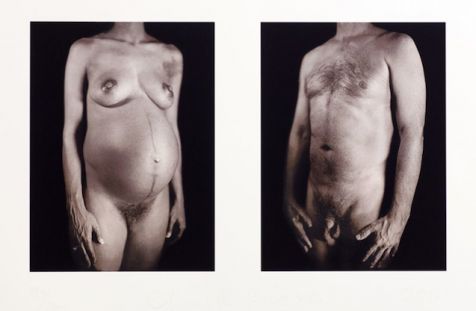 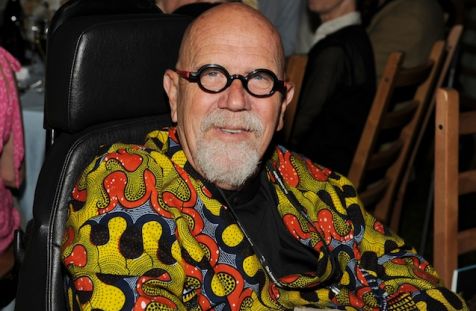