Banksy is an England-based graffiti artist, political activist and film director of unverified identity. His satirical street art and subservise epigrams combine dark humour with graffiti executed in a distinctive stenciling technique. His works of political and social commentary have been featured on streets, walls, and bridges of cities throughout the world. Banksy's work grew out of the Bristol under- ground scene, which involved collaborations between artists and musicians.  Observers have noted that his style is similar to Blek le Rat, who began to work with stencils in 1981 in Paris. Banksy says that he was inspired by "3D", a graffiti artist who later became a founding member of Massive Attack, an English musical group.

His work is rich in dark humour and frequently captioned with subversive epigrams that provide pejorative commentaries on socio-political aspects of contemporary life. Banksy’s own mission statement, ‘Art should comfort the disturbed and disturb the comfortable’,

Banksy displays his art on publicly visible surfaces such as walls and self-built physical prop pieces. He does not sell photographs or reproductions of his street graffiti, but art auctioneers have been known to attempt to sell his street art on location and leave the problem of its removal in the hands of the winning bidder.

Stencils are traditionally hand drawn or printed onto sheets of acetate or card, before being cut out by hand. Because of the secretive nature of Banksy's work and identity, it is uncertain what techniques he uses to generate the images in his stencils, though it is assumed he uses computers for some images due to the photocopy nature of much of his work.

He mentions in his book, Wall and Piece, that as he was starting to do graffiti, he was always too slow and was either caught or could never finish the art in one sitting. So he devised a series of intricate stencils to minimise time and overlapping of the colour.

There is dispute in the street art world over the legitimacy of stencils, with many artists criticising their use as "cheating."

Stop and Search (detail) - AVAILABLE IN OUR SHOP 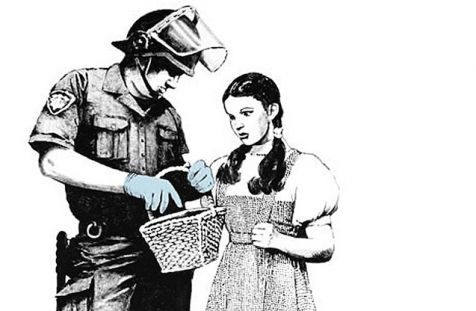 No Ball Games - AVAILABLE IN OUR SHOP! 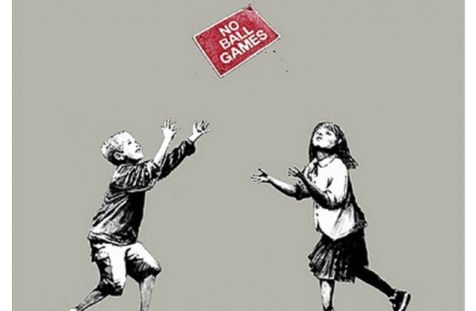 Girl with a Balloon in South Bank, London 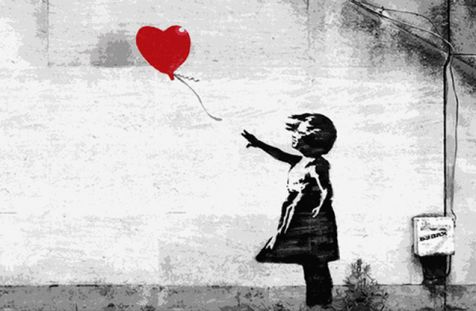