Sarah Lucas started her career in 1988 as part of the rebellious “Young British Artists”. Together with her colleagues Damien Hirst, Tracy Emin and other former students of the renowned Goldsmiths College (London), she roiled the London art scene with her outstanding installations and single pieces. Lucas stands for offensive and blunt photography, sculptures and objects. “There is always something missing in Sarah’s works”, says Damien Hirst of the artist. “There is no way in or out, but nevertheless you are right in the middle of it. That is what makes her so brilliant.”

Fried eggs on the breasts in “Selfportrait With Fried Eggs” (1997) and a naked plucked chicken as a genital replacement in “Chicken Knickers” (1997) shocks the unprepared observer. Her works serve as a memorial against the stereotypical picture of the woman, which Lucas sees in the British popular press. Topless Page Three girls and aggressive headlines inspired the artist to make works such as “Penis Nailed To A Board” (1992) or “Human Toilet Revisited” (1998), which dealt with sex, death, the general “Being British”, masculine desire and the woman’s understanding of her roles.

Born in 1962 in London, the artist describes her works as “hyper-sensitive surfaces, which captures all possible ideas in the air or in the heads of humans.” The observer ought to feel discomfort and emotion in order to be more sensitive to the questions in the room and possibly find himself in them.

Her works can be found in various public collections, such as the Tate Gallery and the British Arts Council, London, as well as in MACBA, Barcelona. Private collectors such as Charles Saatchi or Ingvild Goetz have equally bough Lucas’ works.

You can buy works by Sarah Lucas in our shop. 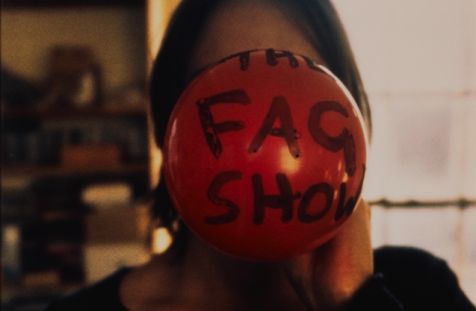 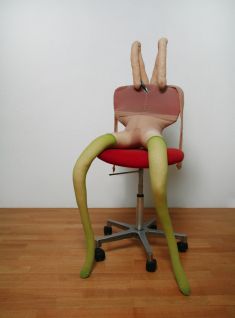 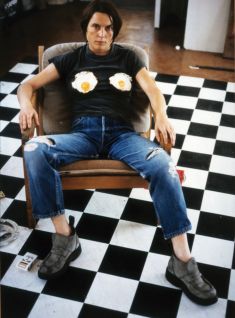