Dalí was a skilled draftsman, best known for the striking and bizarre images in his surrealist work. Hispainterly skills are often attributed to the influence ofRenaissance masters. His best-known work,The Persistence of Memory, was completed in August 1931. Dalí's expansive artistic repertoire included film, sculpture, and photography, in collaboration with a range of artists in a variety of media. Dalí attributed his "love of everything that is gilded and excessive, my passion for luxury and my love of oriental clothes" to an "Arab lineage", claiming that his ancestors were descended from the Moors. Dalí was highly imaginative, and also enjoyed indulging in unusual and grandiose behavior. His eccentric manner and attention-grabbing public actions sometimes drew more attention than his artwork, to the dismay of those who held his work in high esteem, and to the irritation of his critics.

Dalí employed extensive symbolism in his work. For instance, the hallmark "melting watches" that first appear in The Persistence of Memory suggest Einstein's theory that time is relative and not fixed. The idea for clocks functioning symbolically in this way came to Dalí when he was staring at a runny piece of Camembert cheese on a hot August day.

The elephant is also a recurring image in Dalí's works. It first appeared in his 1944 work Dream Caused by the Flight of a Bee Around a Pomegranate a Second Before Awakening. The elephants, inspired by Gian Lorenzo Bernini's sculpture base in Rome of an elephant carrying an ancient obelisk, are portrayed "with long, multijointed, almost invisible legs of desire", along with obelisks on their backs. Coupled with the image of their brittle legs, these encumbrances, noted for their phallic overtones, create a sense of phantom reality. "The elephant is a distortion in space", one analysis explains, "its spindly legs contrasting the idea of weightlessness with structure."

Various other animals appear throughout his work as well: ants point to death, decay, and immense sexual desire; the snail is connected to the human head (he saw a snail on a bicycle outside Freud's house when he first met Sigmund Freud); and locusts are a symbol of waste and fear.

Both Dalí and his father enjoyed eating sea urchins, freshly caught in the sea near Cadaqués. The symmetry of the sea urchin fascinated Dalí and adapted its form to many art works and other foods also appear throughout his work.

Dalí was a versatile artist. Some of his more popular works are sculptures and other objects, and he is also noted for his contributions to theatre, fashion, and photography, among other areas.

Sculptures and other objects

Two of the most popular objects of the surrealist movement were Lobster Telephone and Mae West Lips Sofa, completed by Dalí in 1936 and 1937, respectively. Surrealist artist and patron Edward James commissioned both of these pieces from Dalí; James inherited a large English estate in West Dean, West Sussex when he was five and was one of the foremost supporters of the surrealists in the 1930s. "Lobsters and telephones had strong sexual connotations for [Dalí]", according to the display caption for the Lobster Telephone at the Tate Gallery, "and he drew a close analogy between food and sex." The telephone was functional, and James purchased four of them from Dalí to replace the phones in his retreat home.

The wood and satin Mae West Lips Sofa was shaped after the lips of actress Mae West, whom Dalí apparently found fascinating. West was previously the subject of Dalí's 1935 painting The Face of Mae West. The Mae West Lips Sofa currently resides at the Brighton and Hove Museum in England.

Between 1941 and 1970, Dalí created an ensemble of 39 pieces of jewelry; many pieces are intricate, and some contain moving parts. The most famous assemblage, The Royal Heart, is made of gold and is encrusted with 46 rubies, 42 diamonds, and four emeralds, created in such a way that the center "beats" much like a real heart. Dalí himself commented that "Without an audience, without the presence of spectators, these jewels would not fulfill the function for which they came into being. The viewer, then, is the ultimate artist."

In theatre, Dalí constructed the scenery for Federico García Lorca's 1927 romantic play Mariana Pineda. For Bacchanale (1939), a ballet based on and set to the music of Richard Wagner's 1845 opera Tannhäuser, Dalí provided both the set design and the libretto. Bacchanale was followed by set designs for Labyrinth in 1941 and The Three-Cornered Hat in 1949.

He is credited as co-creator of Luis Buñuel's surrealist film Un Chien Andalou, a 17-minute French art film co-written with Luis Buñuel that is widely remembered for its graphic opening scene simulating the slashing of a human eyeball with a razor. This film is what Dalí is known for in the independent film world. Un Chien Andalou was Dalí's way of creating his dreamlike qualities in the real world. Images would change and scenes would switch, leading the viewer in a completely different direction from the one they were previously viewing. The second film he produced with Buñuel was entitled L'Age d'Or, and it was performed at Studio 28 in Paris in 1930. L'Age d'Orwas "banned for years after fascist and anti-Semitic groups staged a stink bomb and ink-throwing riot in the Paris theater where it was shown".

Dalí worked with other famous filmmakers, such as Alfred Hitchcock. The most well-known of his film projects is probably the dream sequence in Hitchcock's Spellbound, which heavily delves into themes of psychoanalysis. Hitchcock needed a dreamlike quality to his film, which dealt with the idea that a repressed experience can directly trigger a neurosis, and he knew that Dalí's work would help create the atmosphere he wanted in his film. He also worked on a documentary calledChaos and Creation, which has a lot of artistic references thrown into it to help one see what Dalí's vision of art really is.

Dalí also worked with Walt Disney on the short film production Destino. Completed in 2003 by Baker Bloodworth and Walt's nephew Roy E. Disney, it contains dreamlike images of strange figures flying and walking about. It is based on Mexican songwriter Armando Dominguez' song "Destino". When Disney hired Dalí to help produce the film in 1946, they were not prepared for the quantity of work that lay ahead. For eight months, they worked on it continuously, until their efforts had to stop when they realized they were in financial trouble. However, it was eventually finished 48 years later, and shown in various film festivals. The film consists of Dalí's artwork interacting with Disney's character animation.

Dalí completed only one other film in his lifetime, Impressions of Upper Mongolia (1975), in which he narrated a story about an expedition in search of giant hallucinogenic mushrooms. The imagery was based on microscopic uric acid stains on the brass band of a ballpoint pen on which Dalí had been urinating for several weeks.

In the mid-1970s, film director Alejandro Jodorowsky cast Dali in the role of the Padishah Emperor in a production of Dune, based on the novel by Frank Herbert. According to the 2013 documentary on the film, Jodorowsky's Dune, Jodorowsky met Dali in the King Cole Bar in the St. Regis hotel in Manhattan to discuss the role. Dali expressed interest in the film but required as a condition of appearing that he be made the highest paid actor in Hollywood. Jodorowsky accordingly cast Dali as the emperor, but he planned to cut Dali's screen time to mere minutes, promising he be the highest-paid actor on a per minute basis. The film was ultimately never made.

In the year 1927, Dali began to write the libretto for an opera, which he called Être Dieu (To Be God). He wrote this together with Federico Garcia Lorca one afternoon in the Café Regina Victoria in Madrid. In 1974, for a recording in Paris, the opera was adapted by the Spanish writer Manuel Vazquez Montalban, who wrote the libretto, while the music was created by Igor Wakhevitch. During the recording, however, Dali refused to follow the text written by Montalban, and instead, began to improvise in the belief that “Salvador Dali never repeats himself.”

Furthermore, Dalí was very involved in Fashion and photography, for instance he cooperated with numerous fashion designer such as Elsa Schiaparelli and created in 1950 a special "costume for the year 2045" with Christian Dior. Moreover, he collobrated with photographers like Cecil Beaton, Man Ray and Philippe Halsman; and many more.

One of Salvadore Dalí's most famous paintings - The Persistence of Memory 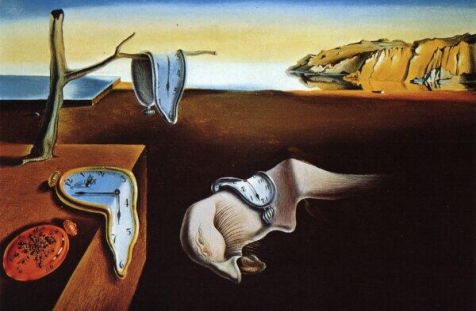 Retrospective II: Birth of Venus (Torso) - AVAILABLE IN OUR SHOP 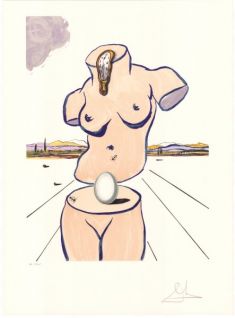 Chevalier surréaliste - AVAILABLE IN OUR SHOP 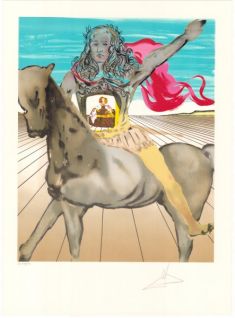 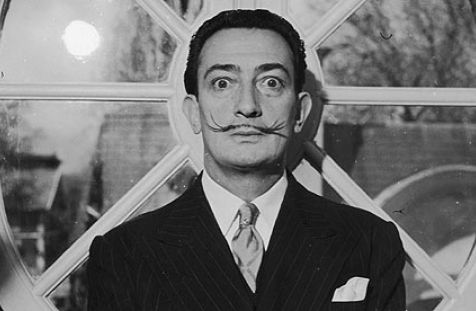 Don Quijote - The Golden Helmet Of Mandrino - AVAILABLE IN OUR SHOP 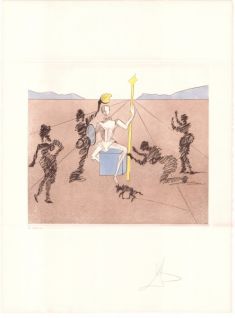 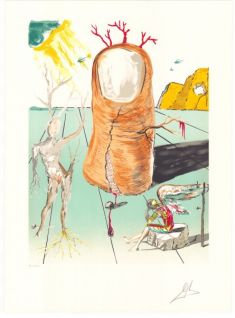