Roberto Dutesco is a Romanian-born photographer now living in New York City. While working as a fashion photographer in the nineties, Dutesco first became aware of Sable Island and the wild horses living there. “At that moment,” Dutesco says, “I decided that I would make it my goal to go and see those horses. I wasn’t traveling there as a photographer, necessarily, but as someone with an intense curiosity about the world around me.” The photographic results of Dutesco’s many pilgrimages to visit the horses of Sable Island are on permanent view at the Dutesco Gallery, in New York’s SoHo neighborhood.

Over the course of several visits, Dutesco captured the beauty and isolation of the wild horses and their austere habitat through still photography and 16-mm film. Over time, and with patience and respect for these living creatures who, in the absence of natural predators, exhibit no fear of humans, he learned the ways of the horses and fell in love with the island in the process. His incredible journey is presented in a full-length documentary entitled Chasing Wild Horses, which has aired many times on the CBC (Canadian Broadcasting Corporation) and other media outlets in the U.S. and Europe.

As a result of Dutesco’s efforts, the Canadian government identified Sable Island as a protected national treasure In 2008. “This legislation underscores the point that, if natural locations like this are to endure, they must be left alone. I have spent the last eighteen years dedicated to that belief and will continue to work for their preservation for the future.”

You can buy works by Roberto Dutesco in our shop. 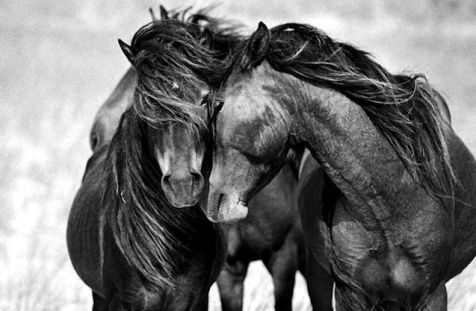