Peter Tunney (American, 1961 - ) returned to his city of dreams, New York City, in 2002. After traversing the world, he was drawn back to his roots to start his next exploration into the fine arts. His oeuvre includes works in photography, painting, installation, and performance. His 2015 show, GIANT GIANT POLAROID, was Tunney's exploration with photography - or as he refers to it PTography. His choice of the Giant Polaroid parallels the unique experience his fine art conveys. Peter says he has found the "last magical miracle in photography" in this 20 inch x 24 inch wood box camera from the late 1970's.

Tunney became well known for his use of positive text as the central, graphic element in his work, repositioning already popular phrases such as "Don’t Panic," "Grattitude", "The Time is Always Now," and "City of Dreams." His work has been included in exhibitions and private collections around the world as well as found throughout pop culture from the Wynwood Walls, dance clubs to top Billboard ranked musicians and their videos. While stuck in traffic, motorists might find solace in his Grattitude billboards vs. the mass marketed advertisements for cars, legal services or the like.

His various roles in life have been a journey to find meaning and fill his void. He was listed as 'magician' on his first business card in high school. From there he morphed from car salesman to investment banker and photo curator to the noted photographer, Peter Beard. Along the way, he met Jonas Salk, the pioneer of the Salk Vaccine. He says that Salk "taught me how to think!" His TEDxWallStreet presentation in 2013 truly exemplifies how he has not only thought but leads with his actions inspired by words.

His photographic process when with models, friends and artists and the Giant Polaroid camera is powered by the uniqueness each image holds. Some are double exposure of the images. Others include collage imagery from a wide variety of sources, painting reproductions, newspaper photographs or early photographs of his own. Tunney defines his process further by saying that he will often collage and paint on the 20x24 image, scan it and print an enlarged version for painting scale.

The artist's latest obsessions, in addition to the Giant Giant Polaroids, have been collecting all the evidence of his last 50 years and integrating all the actual objects into his photography and paintings.

The artist's latest obsessions, in addition to the Giant Giant Polaroids, have been collecting all the evidence of his last 50 years and integrating all the actual objects into his photography and paintings. 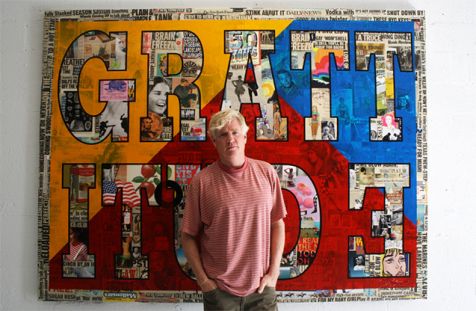 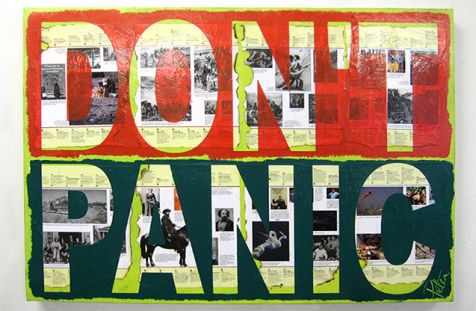