Michail Pirgelis, who was born in Germany and grew up in Greece, is making sculptures and objects which are all based on original parts of airplanes.

Pirgelis' works oscillate between readymade, appropriation and autonomous sculpture, but they also transcend these categories, not least of all through the material which he favors. The airplane parts which, even after their actual utilization, continue to be valuable, and which Pirgelis collects from scrapyards throughout the world, extend the history of the objet trouvé by establishing an extreme position. The concentration on the airplane, which has been optimized with regard to its utilization by human beings in accordance with natural law, situates the works in a productive discourse concerning the relationship between humanity and the technological progress which has had a decisive influence on a modernism characterized by reflection. Flight as the ‘most improbable’ form of human locomotion, together with its mythic connotations, continues in this context to be imbued with a deep fascination.

Exemplary objects are his sculptures from the ‘Airsaddles’ series (2009), brightly polished oute fuselage sections which hang nonchalantly from the gallery wall. Other works is a series of baggage storage compartments which have been transformed into loudspeaker towers. On the one hand, these objects, more than two meters in height, profane the high-tech material through the artistic intervention; and on the other hand, they also make a tongue-in-cheek reference to the technique of bricolage, to assemble and reorganize as a cultural practice in whatever form.

The works of Michail Pirgelis sometimes seem to attain a freedom from their fate of ending up as scrap material. Through the treatment of the artist - the acts of cutting, collaging, highlighting, covering and polishing - the objects reacquire an aura which mass air-transportation has taken away from aviation. Particularly in an era when the threats posed by the airplane as a means of transportation - whether from an ecological perspective, or with respect to the latent menace through international terrorism - receive widespread discussion, Pirgelis' art seems to have much to say about the repercussions of the technologies created by human beings. Thus Pirgelis' works achieve their impact, not only through their formal beauty and texture, but also as a reflection upon the dialectical relationship between humanity and technology which goes all the way back to the Icarus myth.

You can buy works by Michail Pirgelis in our shop. 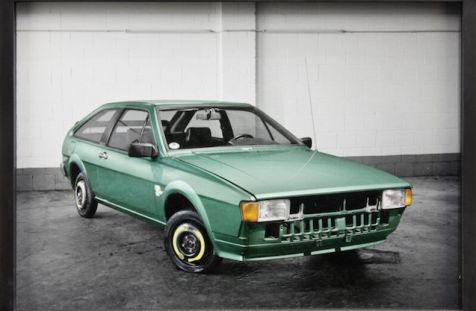 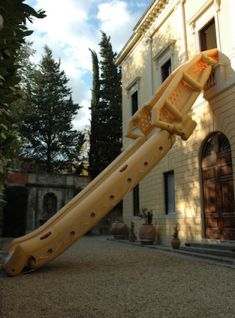 Michail Pirgelis looking for his material 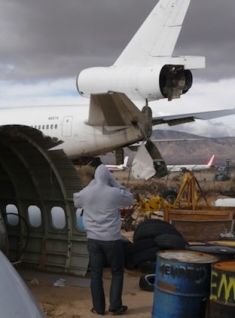