Michael Byron was born in Providence, Rhode Island in 1954. He lives in both New York and Amsterdam. His work can be considered together with that of Julio Galán, Guillermo Kuitca, Saint Clair Cemin and Juliâo Sarmento. It lies in the Surreal more than the Symbolist current, with its whimsical qualities, and shows tendencies towards a new romanticism or a modern-day idealism with its symbols of life and death.

Autobiographical memories, voyages through his inner as well as the outer world of imagination characterize Byron's work. At the same time, the artist toys with the traditional 'Commedia dell'arte' and with figures and forms of popular culture. Bizarre theatrical scenes can be found in his early work (if we can speak of early work in an artist this young). A rather eerie, surreal-satirical world reveals itself. Byron takes historical references from literature as well as newspapers. In an interview (cf. above-mentioned catalogue) by Karel Schampers with the artist in June 1991, Byron answered the question of whether his work should be taken as a reaction to abstract or conceptual art in the following way: He couldn't understand why the past should be referred to at all, this view of things and the type of question were foreign to him. Artistic activity and its sphere of influence should not be seen in any other framework than its own. 'There are always simultaneous movements', explained Byron, 'for example, the Symbolist path has not been broken from Ensor or Nolde till today.' Byron insists on narrative art. 'I have always regarded painting as a narrative medium. If it is understood, then it is successful. Painting remains an optimistic adventure.' (for a translation of the english, see catalogue above). Hence Byron places communication in the center of his creations. He actively involves the viewer and attempts to stimulate the imagination.

In the 80's he created series based on the Dr. Faust motif. A richly illustrated decorative style manifests itself as mixed media already through titles like 'Saint Valentine's Day Heart' or 'The Red Wound in Margaret's Bosom. Brahmin Leader' and 'Pagans on Moonscapes' or on lost islands as in 'Walpurgis Night' from 1987-88. The characterization of the figures slips from a realistic base into the visionary, breaking through the false ground. Byron is good at setting his telescope to distant times to bring characteristics into his paintings from preceding centuries. The spectrum ranges from an Asiatic doll to our present-day Hollywood diva.

Byron considers himself a Symbolist, separating himself from the Surreal. In his own words: 'a reality is another time and another place. The Symbolist attempts to interpret real experience symbolically and pictorially, to translate it.' And thus we repeatedly find the rather meditative aura in paintings and prints such as the color etchings printed by Grafos. And it peaks one's curiosity to imagine how the artist's work will develop in the future 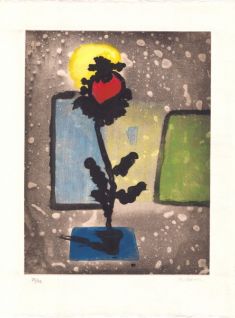