Mel Bochner (born 1940) is an American conceptual artist. Bochner received his BFA in 1962 and honorary Doctor of Fine Arts in 2005 from the School of Art at Carnegie Mellon University. He lives in New York City.

Bochner is Jewish and his work sometimes explores Jewish themes. Starting in the 1960s, he evolved several of the exhibition strategies now taken for granted, including using the walls of the gallery as the subject of the work and using photo documentation of ephemeral and performance works. As Richard Kalina wrote in Art in America in 1996, Bochner was one of the earliest proponents, along with Joseph Kosuth and Bruce Nauman, of photo-documentation work in which the artist "created not so much a sculpture as a two-dimensional work about sculpture."

Bochner was born in Pittsburgh in 1940. In high school, he won early recognition for his talent from The Scholastic Art & Writing Awards and studied with Joseph Fitzpatrick]. He studied art at Carnegie Mellon University and graduated in 1962. After leaving Pittsburgh, he studied philosophy at Northwestern University near Chicago. He moved to New York in 1964 and worked as a guard at The Jewish Museum.[3] In 1966, he was recruited by the influential art critic Dore Ashton to teach art history at the School of Visual Arts in New York.

His 1966 show at the School of Visual Arts, "Working Drawings And Other Visible Things On Paper Not Necessarily Meant To Be Viewed As Art", is regarded as a seminal show in the conceptual art movement. Bochner photocopied his friends’ working drawings, including a $3,051.16 fabricator’s bill from Donald Judd. He collected the copies in four black binders and displayed them on four pedestals. The show was remade at the Drawing Center, New York, in 1998.

Bochner began making paintings in the late 1970s, and his paintings range from extremely colorful works containing words to works more clearly connected to the conceptual art he pioneered. For a 1998 work titled Event Horizon, for example, he arranged prestretched canvases of various sizes along a wall, each marked with a horizontal line and a number denoting its width in inches. Together, the lines appear to form a horizon, creating what Jeffrey Weiss in his catalog essay for Bochner’s 2007 exhibit Event Horizon called a representation of “the world as a fantasy of quantifiable truth.” Bochner made his first prints at Crown Point Press in the early 1970s, published by Parasol Press. You can find works of Mel Bochner in all important Collections in the US as well as in Europe. The Museum „HAUS DER KUNST“, Munich Germany, were showing Mel Bochner’s work 2013 in a big Solo Exhibition

He taught at Yale University as a teacher's assistant in 1979 as senior critic in painting/printmaking, and in 2001 as adjunct professor.

Blah Blah - available in our shop! 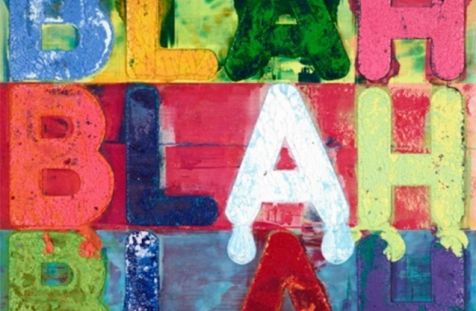 Thank You - available in our shop! 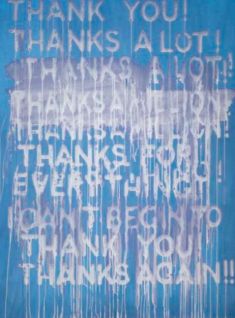 Amazing - available in our shop! 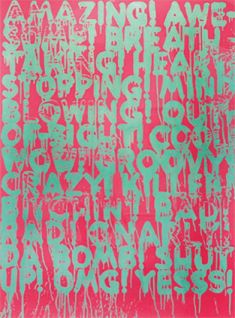 Head Honcho - available in our ship! 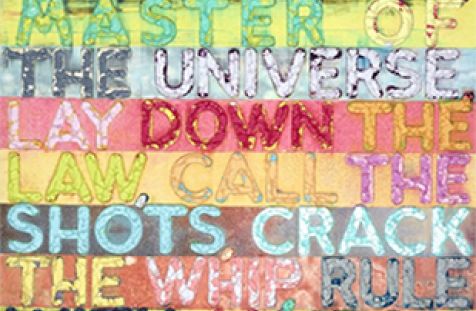