Martin Kippenberger (1953-1997) was widely regarded as one of the most talented German artists of his generation. A dandyish, articulate, prodigiously prolific artist who loved controversy and confrontation and combined irreverence with a passion for art, Martin Kippenberger worked at various points in performance art, painting, drawing, sculpture, installation art and photography and also made several musical recordings.

His fellow travelers included Markus and Albert Oehlen, Georg Herold and Günter Förg, and they sometimes seemed almost as well known for their carousing as for their work. Kippenberger once made a sculpture titled „Street Lamp for Drunks"; its post curved woozily back and forth.   He considered no style or artist's work off-limits for appropriation, though his paintings most frequently resembled heavily worked, seemingly defaced fusions of Dadaism, Pop and Neo-Expressionism and often poked fun at the art world or himself.   His penchant for mixing media, styles and processes influenced younger artists on both sides of the Atlantic. Yet the German art establishment seemed to have difficulty with his antics, which included bying a gas station during a trip to Brazil in 1986 and renaming it the „Martin Borman Gas Station".

Although he had his first museum exhibition at Hessisches Landesmuseum in Darmstadt in 1986, he drew greater attention from institutions outside Germany, with exhibitions at the Pompidou Center in Paris (1993), the Boymans-van Beuningen Museum in Rotterdam (1994) and the Museum of Modern and Contemporaty Art in Geneva, where a show of his work have also opened at museums in Antwerp, Belgium, and Mönchengladbach, Germany.

His work was included for the first time in Documenta X exhibition in Kassel, Germany (1997). Kippenberger began making and studying art at an early age, boycotting his grammar school art class when its teacher gave him only the second-highest grade. In the early 70's he studied at the Hamburg Art Academy. After a sojourn in Florence, where he had his first solo show in 1977, he settled in Berlin in 1978. In that year he founded „Kippenberger's Office" with Gisela Capitain, mounting exhibitions of his own art and that of his friends; became business director of S.O. 36, a performance, film and music space; started a punk band called the Grugas and made his first recording, a single called „Luxus", with Christine Hahn and Eric Mitchell.

An avid collector of art by his American and German contemoraries, he also was responsible for the changing display of art at Berlin's premier art hangout, the Paris Bar. Leaving Berlin, originally for a long visit to Paris, Kippenberger spent the early 1980's as an active member of the Cologne art scene. Thereafter he tended to be peripatetic, punctuating life in Germany with prolonged working visits in cities like Los Angeles, Seville and Madrid. In his last years he taught at the Frankfurt Academy of Art and the Kassel Art Academy.   Kippenberger died of cancer at the age of 43.

You can buy works by Martin Kippenberger in our shop. 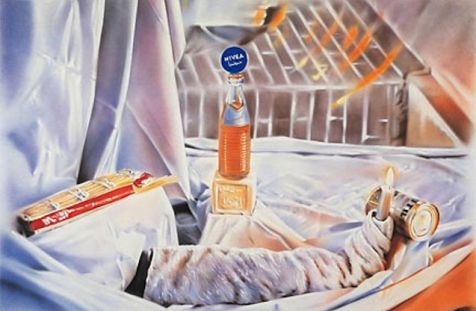 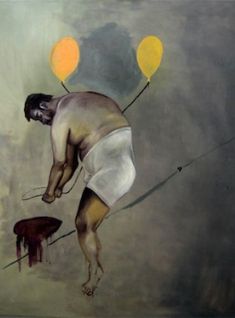 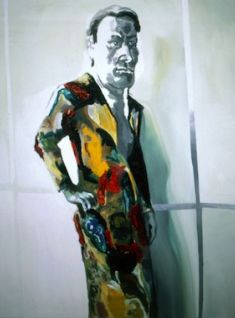