Born in 1941 in Böhmen, the artist works as a painter, set designer, graphic artist, sculptor, and poet. An avowed Catholic, he is one of the most famous German visual artists and styles himself as an eccentric painter. Lüpertz lives and works in Berlin, Karlsruhe, Düsseldorf, and Florence. His works, often considered to belong to the genre of neo-expressionism, distinguish themselves through their suggestive power and archaic monumentality. Lüpertz achieves this effect by striving to turn the image or represented object into an archteypal expression of existence.

In the 1960s, Lüpertz began to paint works with simple, objective content, contrary to the then prevailing tendency toward abstraction. In a 1966 manifesto, he titled his emphatically expressive pictures "dithyrambic painting" in reference to the ritual songs of the ancient Greek cult of Dionysus. To Lüpertz, the universe seems permeated by an enduring rhythm to which all else is subordinated. From 1969 to 1977 he produced his "German motifs," large-scale still-life compositions featuring symbolic objects of the past such as helmets, paddles or flags.

In 1977 Lüpertz began challenging the abstract tendencies of the 50's in his "style concepts." In the early 80's he turned to a new objectivity and spatiality, using art-historical quotations and props. In addition to using printing techniques, Markus Lüpertz has worked as a stage designer and sculptor since the 1980s.

Many of his sculptural works refer to ancient mythology. They have somewhat clunky and cumbersome and often sharp surfaces, that appear out of proportion or even damaged.

Lüpertz began his artistic career as an apprentice painter of wine bottle labels. From 1956 to 1961 he studied at the design school in Krefeld with Laurens Goosens. This was followed by a period of study at the Maria Laach monastery and a semester at the art academy in Düsseldorf. In order to finance his studies, Lüpertz worked as a miner and in road construction. In search of adventure, he joined the French Foreign Legion, which he soon deserted. In 1962 he moved to West Berlin, where he co-founded the self-help gallery "Großgörschen 35" with Bernd Koberling and Horst Hödicke.

In 1970 Lüpertz was awarded the Villa Romana prize and spent a grant year in Florence. In 1976 he became a professor at the academy in Karlsruhe, and in 1982 took part in the Documenta VII in Kassel. In 1986 Lüpertz was summoned to the Düsseldorf Art Academy, which he very successfully led from 1988 to 2008. In 1990 he was awarded the Lovis Corinth Prize by the artists' guild of Esslingen. Important exhibitions have been devoted to his work in Düsseldorf, Munich, Berlin and Valencia.

You can buy works by Markus Lüpertz in our shop. 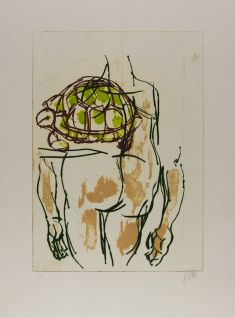 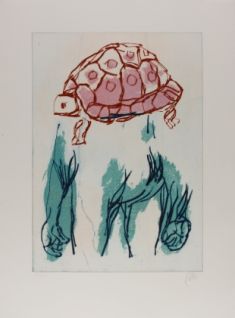 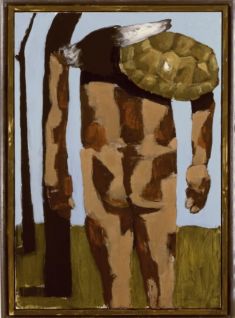 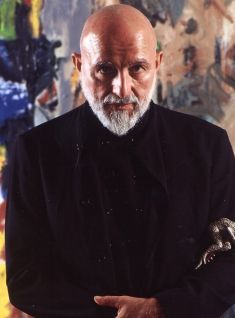