"Pictures are commands. Namely: Game! Anyone can do it, it's nothing special. One must only refrain from himself."

Meese plays in his vocabulary. His installations and performances have titles such as "Ahab says: MOBY DICK is NO DEMOCRACY. ALL DEMOCRATS WILL SOON NO LONGER sit in one BOAT (Battleship of democracy sinks never) (2009), "Arch-State Atlantis" (2009). The works want to polarize, to unleash something and to revolutionize. "The volcano of art may erupt" he demands. "Importance, religion and fear" should be buried under art. "The ego is completely relative."

In his manifestos Meese, who studied at the Hamburg Academy of Fine Arts with Franz Erhard Walther, calls out the "dictatorship of art":
"The "dictatorship of art" is about the most loving power of a thing such as love, humility and respect, combined and culminating in the reign of art. In the omnipotence of the art is not about the lust for power of the artist or the fantasy of domination of self-realizationer and reality fantasies, but the anti-nostalgic, no alternative power of art, that is the thing. Art is the question of power not the artist."

Works of Jonathan Meese were purchased already from museums like the Pompidou Centre in Paris, the Staedel in Frankfurt and the Museum Apteiberg in Moenchengladbach and are in public collections such as the collection of contemporary art in the Federal Republic of Germany and in the private collections of Harald Falckenberg and Charles Saatchi.
Meese lives and works in Berlin and Ahrensburg, near Hamburg.

You can buy works by Jonathan Meese in our shop. 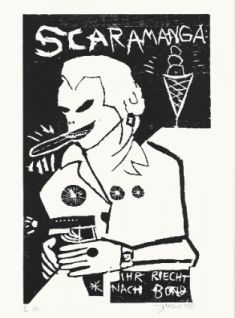 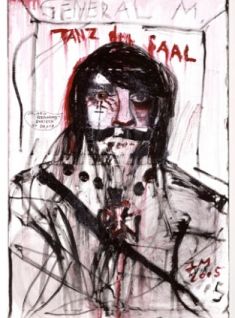 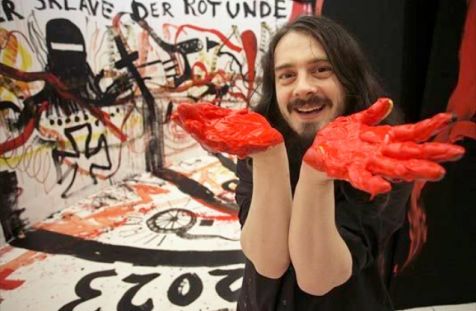