In the early seventies the American John Baldessari decided to burn up all the paintings he had produced in the last 13 years at a spectacular event. The artist called this happening “Cremation Project” – it was simultaneously an act of liberation and the impulse for his present-day work which is among the most important in Conceptual Art. Alongside photography and video performances, it encompasses collages, sculptures and cut-ups.

Baldessari is a revolutionary thinker, born in 1931 to an Austrian father and Danish mother. With his work he consistently attempts to liberate himself from art’s preconceived images and traditions.

At the beginning of his career the artist collected photographs out of the bins of photographic laboratories. He cut them up, edited them and contrasted the material with writing and texts.

In the early eighties Baldessari purchased large quantities of stills and production photos from B-movies and distorted them to the point where the associations triggered by the scenes reached an entirely different spectrum. In order to direct the observer’s view solely to the form of his work he stuck coloured dots over the involved people’s faces, taking their identity and expression away from them.

“Generally I can rarely work with just one picture” says Baldessari. “It seems as if I always need to make several pictures collide with one another. I think the reason for this is that in life it is never just about a single thing. Multiple elements are clashing, giving meaning to one another in the process.”

Baldessari, who is known to be a workaholic, does not want to appear elevated in his art. He consistently disrupts his motifs with irony and humor, thereby sharpening the audience’s perception.“I will not make any more boring art”, the conceptual artist repeats this like a mantra and his over 120 solo- and 300 group exhibitions across the world appear to be evidence for it.

Baldessari’s work has been purchased by countless international museums, such as the Centre Pompidou, the Tate London, the Museum of Modern Art (New York) and the Kunsthaus Zürich. His work can be found, amongst others, in the private collections of Harald Falckenberg, Mick Flick and Ingvild Götz.

You can buy works by John Baldessari in our shop.

Two Assemblages, 2003 - AVAILABLE IN THE SHOP 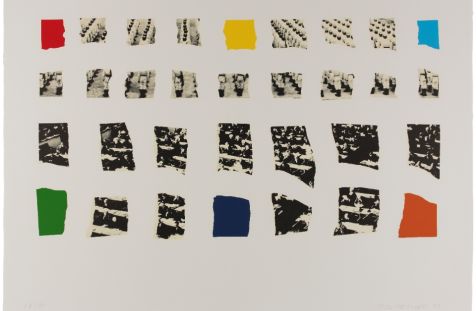 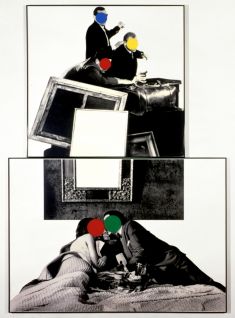 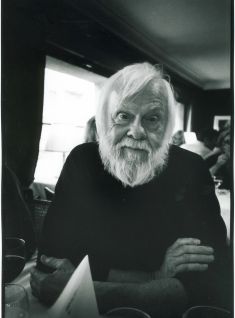