Joan Miró was born on April 10, 1893 in Montroig, near Barcelona and died on Dec. 25, 1983 at his country home 'Son Abrines' not far from Palma de Mallorca. He studied at the Business School, then the Art Academy of Barcelona, and at the Gali Academy (1912-15) and then at the Free Drawing Academy of Sant Lluch. In addition to his preoccupation with classical Modern art and Catalan Romanesque painting and popular art, he was also increasingly fascinated with the earliest pictorial traces left by humankind, cave paintings. After some attempts at Cubism and a meticulous presentation of volume, he arrived at his direct language, which he developed throughout the rest of his life. Acquaintance with Picabia, Picasso, Dada art and poetry, had contact with Max Jacob and Tristan Tzara, but also with the artists and poets of Catalan culture. Miró moved his atelier to Paris in 1921. In 1923-24 came the breakthrough to his own symbolic-abstract language. Becomes a member of the Surrealist movement. Already in 1929, he creates his first plastic works, followed in the course of the years by ceramics, bronze sculptures, objects and assemblages as works of parallel importance to his paintings and graphics. Miró's work today provides a first class forum for artistic exchange at the Miró Foundation established in 1971 in Barcelona, whose museum was inaugurated in 1976. Miró can be considered one of the most important artists of his time. His graphic works occupied a central place in his oeuvre. The poetic vision, dramatism and cheerfulness of his paintings go hand in hand with his wide, open pictorial spaces.

Miró's is simple and complex at the same time. His early beginnings are in painting, drawing and graphic art. In 1929 he does his first sculptural work, and in 1944, begins collaborating with the ceramicist Artigas. Only in 1966 did Miró begin to include bronzes among his sculptures. The assemblages of objets trouvés underwent a lasting transformation. In 1972 came his first works in cloth. A milestone for the refurbishing of his works was the creation of the Fundació Joan Miró in 1971 (opened to the public in 1975), built on a promontory overlooking Barcelona. The architect of the foundation building was Josep Lluis Sert, the same architect who had built Miró's studio at Son Abrines on Mallorca in 1956, where Miró was to work until the ripe age of 90. Some of the works the Fundació Miró has in its possession include a collection of his sketchbooks, sketches, paintings, sculptures, tapestries and a complete collection of all of Miró's graphic work.

Joan Miró's name is known to all, and he is associated with a style which appears joyful and carefree. Lines, colors and spots can be likened to eyes, arms, breasts, lips, moons, suns and stars. It may be surprising that this world of animals and people, vegetation and metamorphosis is a language which can be understood. It is the language of sorrow as well as joy, of anger and poetry, of captivation and release. Miró created a complex universe with an unwavering introverted continuity. The interplay between painting and sculpture played a significant role. He was both sculptor and painter. His sculptural forms took over space with the same directness as his paintings. Over the years, he produced extensive graphic series: lithographs, etchings and woodcuts. Some lithographs were transformed into posters - pamphlets of an artistic style which was socially involved without losing its poetic aspect.

Political circumstances forced the artist to move - from Paris in 1935 back to Barcelona, and in 1936, at the outbreak of the Spanish Civil War, back to Paris again. Miró's solidarity with Catalonia was reflected in many of his works, even those created beyond the Franco era. Accusations and appeals are manifest in his painting, posters and stage sets. Among these are his creations for Alfred Jarry's 'Ubu Roi', a play on the abuse of power. In countless drawings and graphic series, Miró concentrates on this motif. His art became the art of resistance and non-violence.

In 1939, Franco's troops take Barcelona. From 1939 to 1944, Miró works on his famous Barcelona series in his small printing workshop in Montroig. 50 lithographs are produced. In 1940, he begins the painting series 'Constel.lacions' in Varengeville. The invasion of the german troops force him to leave France. Mallorca becomes his definitive residence. Since childhood, Miró had spent all his summers in the Province of Tarragona (in the village of Montroig, where his father was from) or on Mallorca (where his mother was from). He kept this work rhythm in later life. The landscapes of these places are reflected in his paintings.

It was not only his graphic work that made Miró renowned throughout the world, but also his monument commissions. In 1944 he begins a lasting collaboration with the ceramist, Josep Llorens i Artigas, a friend from childhood. From then on, they produced ceramic murals and sculptures. In 1947, Miró spent eight months in New York. There, he created his etching sequence to Tristan Tzara's 'L'Antitête'. In 1929 he produced the lithographs to accompany Tzara's 'l'Arbre des Voyageurs'. These are only a few of the many examples of his collaboration with poets and writers. Towards the end of the 40's, he comes into contact with the Galerie Maeght. From then on, exhibits and editions on a high level enrich the work of the mature artist, which can be seen in the selection offered here. It is also clear that the dialogue between the artist and writers and poets continued intensely into his latest artistic periods.

Miró succeeded in obtaining a joyfulness which came close to earnest. The small aspects of Miró's art never belie their large dimensions. He enjoyed hiding himself in the meadows of Montroig and observing the comings and goings of bees, cicadas, birds and worms. He spied optically. Beginning in 1930, the mysterious attributes of the female began to interest him. Eroticism and poetry, sensuality and humor were all bundled together. Heaven and Earth, these were his themes. Miró treated all forms of life with the deepest respect. This feature also characterized his microscopically enlarging eye. He seemed to want to properly greet both the fragile and the threatening through his paintings. He became the magician and shaman of an earthly cosmos and a powerful space. This was his form of communication with life and the source of his poetry.

Miró raised his paintings like plants, and in that sense he was a gardener, like Paul Klee. The composition grew not so much from the structure as from an organic understanding. Miró let himself be surprised, and he kept this capacity for astonishment and fright in the face of the signs and symbols which cropped up under his hand into his older age. It was a creative force. At a late stage, he let aspects of the most avant-garde artistic movements filter into his work. In his etching series, 'Lapidari' and 'Rupestres' (available here), for example, traces of Informal art can be found. His expression always retained its limpid quality. And wisely, Michel Leiris, in his famous essay from 1947, gives the following advice: 'Encounter his works without preconceptions and let your eyes dive into them as if they were clear water, and wash your pupils in them'. Years later, in 1970, Michel Leiris wrote of the special and striking power of expression of a child. He was referring in general to childhood, and not to the artist's in particular when he said: 'It is the hand itself which embodies the intelligence, not the hand which must be directed by the mind'. These statements lead us to the key to understanding Miró's work. Leiris also writes of the kaleidoscopic interplay of the endless possibilities. Miró knew that everything had meaning, and that there was no boundary between the figurative and the non-figurative. Miró had brought to light the rudiments of a symbolic language which was not only linked to the Western world. To him, Neolithic art, cave paintings and children's drawings were great things to be taken seriously. Miró was able to introduce some of the harmony of the sphere, and he did this through lines and structure, rhythms, gestures, shapes and volume, the power of association and charisma 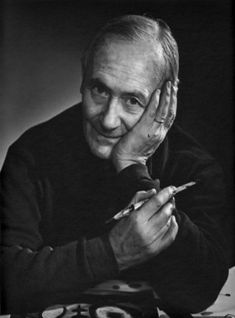 Malabarista - AVAILABLE IN OUR SHOP 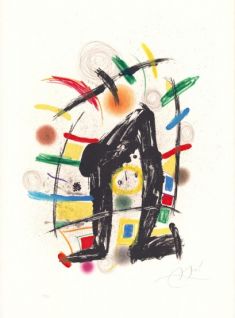 Hommage a Gaudi - AVAILABLE IN OUR SHOP 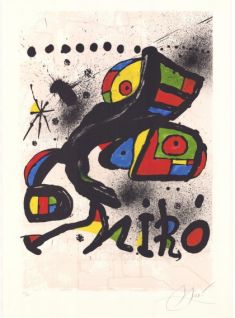 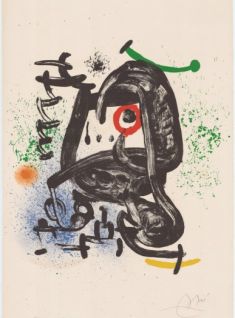