Marilyn Monroe, Madonna, Cindy Crawford or president Barack Obama – Jean-Luc Moerman covers the skin of photographed models, politicians or international jet-setters with his unique ornaments. Two entirely different worlds come together, he uses old master nudes such as Lucas von Cranach's Lucretia or Boticelli's Venus as the foundation for his tattoos. The original symbolism disintegrates, a new ironic, sarcastic, socio-critical or even worshipful meaning develops. With his biomorphic patterns on the bodies of seemingly immortal historical icons he expresses the transience of symbols.

The artist was born in Brussels in 1967 and still lives there today. He came to international prominence through exhibitions and fairs in Europe, the USA and Asia. Far away from the institutionalized and academic art world Jean-Luc Moerman started leaving his mark on Brussels' streets with his self-made stickers in the early 1990s. With roots in Street Art and manifold influences from the graffiti-, Hip-Hop-, Rap-, and skater-scene as well as the art of graphic novels and Japanese Mangas he left his urban tattoos on walls, windows, cars, various ready-mades, whole rooms, but also on paper and canvas and last but not least on human skin.

You can buy works by Jean-Luc Moerman in our shop. 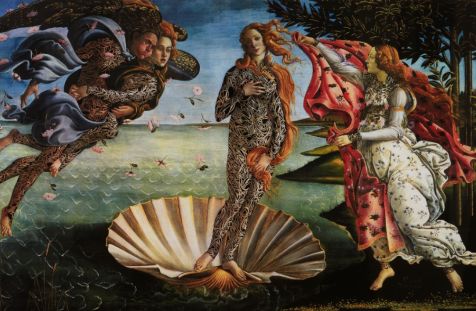 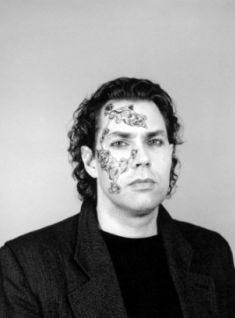