The Huichol are among the last indigenous groups in Mexico who have successfully preserved their spiritual identity.. The tribe dates back to the Mesoamerican era and consists of close to 35 000 people who live in the Sierra Madre Occidental. As voyagers par excellence they sustain themselves as farmers in a terrain they consider sacred. Accordingly, they maintain their eco-systems with profound sensibility towards nature and celebrate the unity between man and nature in an extraordinary spiritual legacy that has been passed down by generations for millennia. In their ancient shamanic tradition, the Huichol to this day worship Gods who represent forces of nature and advocate a peaceful conduct with the gifts of nature.

Huichol art reflects astonishing cultural sophistication and serves as expressive manifestation of their spiritual devotion. Each artefact is unique and reveals most meticulous artisan craft: evolving from sacred votive objects, they are elaborately decorated with glass beads. Shining in bright colour palettes, the distinct ornamental aesthetic of Huichol art echoes their joyful ceremonialism and has served as an important influence on Mexican modernists such as Diego Rivera and Frida Kahlo. In the 1950s Huichol art attained world renown by travelling galleries and museums throughout the world.

You can buy works by Huichol in our shop. 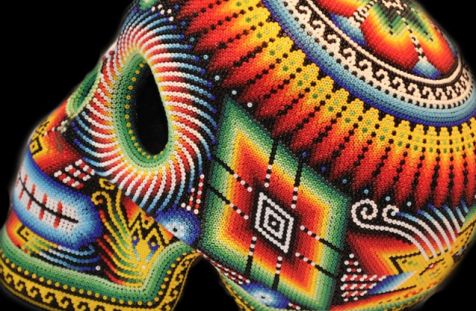