Günther Uecker creates nail-landscapes, sometimes they sprout in a scrubby mess, sometimes they look bent by a wind gust. The nails form swirls, clusters that sprawl almost organically and cowering bundles. Like no other Günther Uecker gives a soul to the plain metal pin, continuously breathing fresh life into it among its counterparts. He is respectfully called a nail artist and he stoically tolerates this name, even if it improperly constricts his work.

The artist was born in Wendorf in Mecklenburg in 1930 and began his art studies in Wismar in 1949. He then went to the art school in Berlin-Weißensee and to the art academy in Düsseldorf in 1955, the city has been his second home ever since. Uecker also lectured there as a professor between 1974 and 1995. He created his first nail pictures in the early 1960s. Uecker traces the idea for this back to a crucial experience in his childhood when he wanted to protect his family from the approaching Russian army in World War 2: “The worry that something could happen to my sisters and my mother made me secure the house and barricade it with beams and logs. I nailed up everything from the inside and blocked up the windows and doors”.

Günther Uecker became a member of the artist group ZERO in 1961, its founders Heinz Mack and Otto Piene propagated a new beginning of art in opposition to the German Informel. He then occupied himself with kinetic light art, studied optical phenomena, oscillation and and series of structures. Together with Thomas Lenk, Heinz Mack and Georg Karl Pfahler Günther Uecker represented Germany at the Venice Biennale in 1970. His oeuvre includes paintings, object art and installations but also stage sets and films.  Günther Uecker only started using nails as his main design medium in 1966, after the group ZERO dissolved, until today the material has remained integral to his work. In auctions his work has long ago cracked the one-million-euro barrier.

You can buy works by Günther Uecker in our shop. 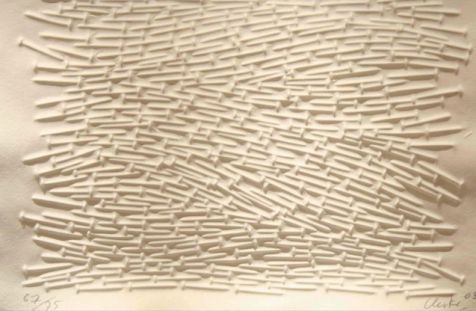 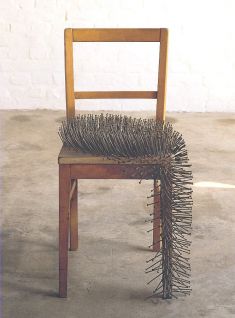 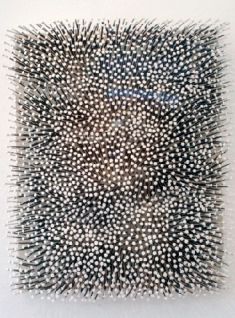 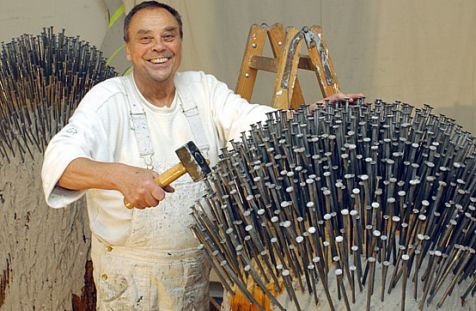