Even as a young boy the photographer Gregory Crewdson, born in 1962 in Brooklyn, would eavesdrop on his father’s meetings: the psychoanalyst attended to his patients in the basement of the family home and Crewdson learnt early on about the abyss of the human soul, experiences which would later inspire him to his famous series “Beneath the roses” and “Twilight”.

In the stretch “Beneath the roses” which is made up of large-sized colour photography, Crewdson thematises the tragedy in a beautiful home. The beautiful appearance of an idyllic family life, the sad and sometimes gruesome stories of women, men and children. All these are hinted at in the artist’s works. The characters are in limbo. They endure what they have to endure.
In each picture Crewdson poses his viewer a riddle. He stages the life in the suburbs and small cities of Massachusetts.

Sometimes his shots appear to have been taken from David Lynch’s cult film “American Beauty”. But Crewdson would rather be inspired by Alfred Hitchcock: The connections reveal themselves not only in the subjects, but most especially in the gloomy colour scheme of his works.

On the other hand his subsequent series “Sanctuary” and “Fireflies” managed without colour. However they both have the same unsettling poesy. In the series “Sanctuary” the artist photographs the sets of Italian film classics and concentrates on the material of the surrounding. This time his rooms are void of humans, but equally charged with tension.

Crewdson’s shots are always lavish. With his large team he sets up stages which are reminiscent of film production. The photographer leaves nothing to chance. His pictures are planned up till the smallest detail. Due to their perfect composition they often times get an almost picturesque look.Due to the enormous production costs, which Crewdson puts into the staging and processing of his works, his pictures only exist in small quantities.

You can buy works by Gregory Crewdson in our shop. 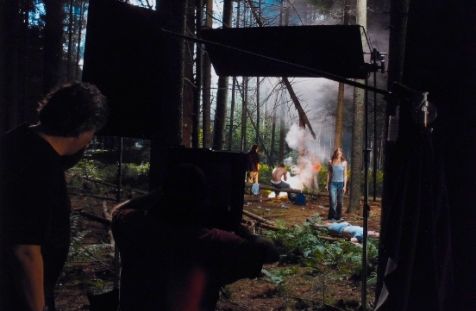 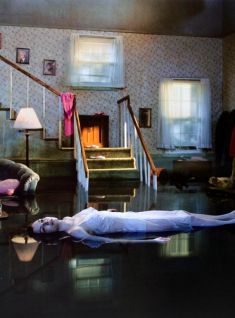 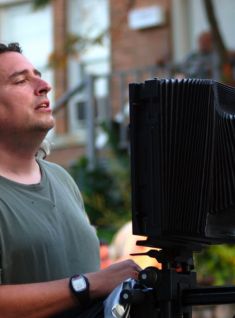