Red, yellow and blue threads are spanned between the floor and the ceiling of a gallery.From far away they merely seem like thin lines crossing the room. How do you call an artist who crosses a room only with thread? Fred Sandback called himself a “sculptor”. While the artist, who passed away in 2003, appreciated Michelangelo, Rodin and Henry Moore, his own work does not contain anything figurative or narrative.

His manipulations of space are minimal, using the basic elements ceiling, floor and wall as starting points. The artist mostly works with thin acrylic thread. These sometimes form rectangular, window-like structures, sometimes they are set close together, like a grid, and sometimes they form geometric elements such as cubes. The threads can be read as a boundary, but it is probably more precise to think of them as three-dimensional drawings in the room. Fred Sandback also described them as “drawings that can be inhabited”. The relationship between audience and creation is inherent in this thought which says that the audience is always part of the creation and is thus constantly connected to the creation. Put differently, the installation provides coordinates for the observer’s movements, his spatial, physical and psychological situation changes when he crosses the room.

Born in Bronxville in 1943, Fred Sandback studied philosophy before he attended to art. Many of his environments only exist for a short time like a couple of days. The artist wants to achieve a certain, specific situation which also means that his work cannot be repeated, it is unique to a certain degree. Being bound to the structures and characteristics of a certain place, all of his installations are different. “I like that my work is tied to a certain place, you cannot just take it home with you. My art has its own space and lifetime”, the artist declared.

Fred Sandback’s drawings in the space of a room are no cool geometric structures but appear with their fragility and delicateness as much reduced, poetic structures. While bold colours dominated his early work he later worked mainly with pastel colours or the non-colours black, white and grey. His work he left after his death contains a great many drawings and prints. Fred Sandback in public collections: DIA Art Foundation.

You can buy works by Fred Sandback in our shop. 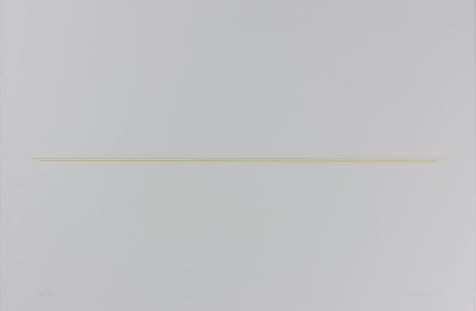 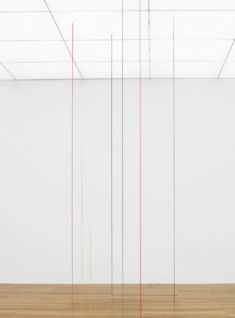 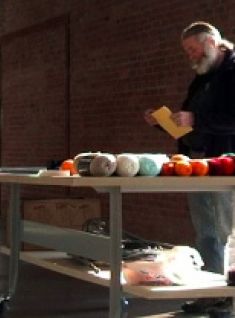