The Scandinavian artist duo wants to unsettle and provoke the observer. Their installations, sculptures and performances have been among the most innovative standpoints for years, roughening up the art scene with wit and irony. Analyzing spatial situations and their meanings, they manage to abolish accustomed contexts of meaning by using targeted manipulation. For example they have already transformed the White Cubes of the art world into dungeons, public toilets, endless Kafkaesque shelters, places of sexual activity or subway stations and they made a caravan burst through the asphalt of a Milan high street.

When the artists consigned a Prada Store into the Texan desert into the middle of nowhere between Marfa and the village Valentine, they caused a stir with this biting commentary. It was a hyper-realistic replica of a typical cube-shaped Prada-boutique; Miuccia Prada herself chose the shoes and handbags from the fall collection 2005 that were displayed in the window. However, the permanent sculpture cannot be entered; there is neither an entry nor an exit.

Elmgreen & Dragset had their first mayor solo-exhibition in a German museum in the ZKM in Karlsruhe in 2010 with “Celebrity – the One & The Many”. The exhibition acted as closure to the trilogy that had started several years ago with “The Welfare Show” in Bergen and London and was continued with “The Collector” in Venice. It can be visited this year in Rotterdam in an old submarine dockyard which is used by the Boijmans van Beuningen museum as an exhibition hall.Their exhibitions persuade with the stringently constructed pieces which are meticulously detailed. For instance, in the exhibition in Karlsruhe a small table could be found next to the entry which held a withering flower bouquet and a seemingly carelessly placed greeting card. It read: “Dear Ingar, dear Michael, thank you for everything. You are amazing!”

This refers to one of their collectors who discovered the artists for himself years ago. He purchased “Temporarily Placed”, a piece for which Elmgreen & Dragset received the national gallery’s prize for young art in 2002. Today the installation is exhibited in a private museum in Berlin. The subtle irony of the pieces also appears in the presentation. The museum uses a former air raid shelter as exhibition space which is dominated by its solid concrete architecture and thus does not allow passersby to look inside.  Especially for “Temporarily Placed” an opening has been broken out of the facade to allow the guests staying in a specific room of the hotel opposite to look at the artwork free of charge. The installation transforms the room in the museum into a sickroom. It contains a screen and a hyper-realistic male wax figure in pyjamas, lying in a hospital bed that has been pushed under the window, covered with a duvet that looks deceptively real, especially from further away.

The artist duo has been working together since 1995 and used to be a couple till 2005. In 2000 they were nominated for the Hugo Boss Prize that is awarded by the Solomon R. Guggenheim Foundation in New York. 2009 they were the first artists to be appointed curators for two national pavilions in Venice. According to their biographies Michael Elmgreen (*1961) from Denmark and Ingar Dragset (*1969) from Norway presented the Danish pavilion in cooperation with the Nordic pavilion (Norway, Sweden, Finland). The Project “The Collectors” was highly popular with the audience but was also acclaimed by the art critics.

You can buy works by Elmgreen and Dragset in our shop.

Portrait of the Artist as a Young (homosexual) Man, 2004 - AVAILABLE IN THE SHOP 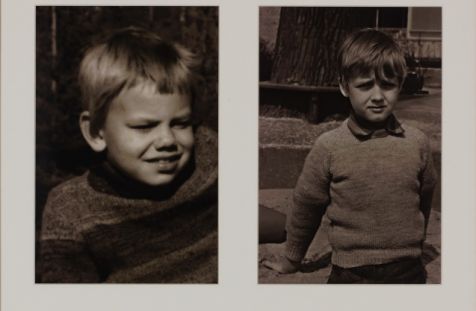 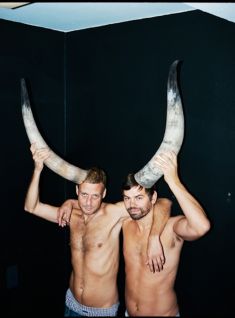