The new superstar of contemporary German painting is Daniel Richter.
His art is powerful and fiery, full of meaning and references, bold
and political. The large-format paintings, in which the ex-punk from
the Hafenstraße of Hamburg takes up current themes in feverish neon
colors, garner six-digit sums in international auctions. Finally, an
unconventional artist celebrated in the feature sections of
newspapers. Ghostlike figures wander wide-eyed throughout mostly
nocturnal and apocalyptically lit city- and landscapes in most of the
48-year-old's paintings. Aggressive gestures are contained in
action-packed scenes. He collects his characters from horror and
science-fiction films, pop entertainment, art history, and
contemporary media.

"Ultimately, I reserve my admiration for an art that refers to a
radical fomal position as well as a political and social one"
confessed the artist. He has called one of his works "Revidyll"
(2006). The title is a portmanteau of "revolution" and "idyll." It
shows a human figure plunging headlong into the darkness of night.
Closer inspection reveals El Lissityky's draft of a podium for Lenin.
The two small figures at the lower edge of the painting represent
Lenin and the Russian composer Schostakowitsch.

The late-bloomer began art school at the age of 29 at the Hamburger
Kunsthochschule. In the beginning of the 90's, painting was "out".
After an abstract beginning phase, Richter resumed figurative
painting, inspired through confrontation with the greats of classical
modernism like Manet and Gauguin. His new series of works is based on the landscape paintings of Romanticism: instead of Caspar David
Friedrich's white cliffs in Rügen, we see the immense, barren Hindu
Kush. His works can be found in the collections of the Museum of
Modern Art in New York and the Centre Pompidou in Paris, as well as in
the Falckenberg collection in Hamburg. 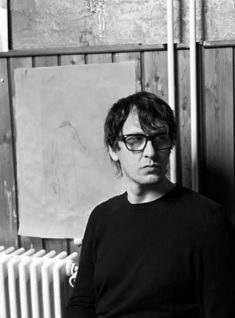 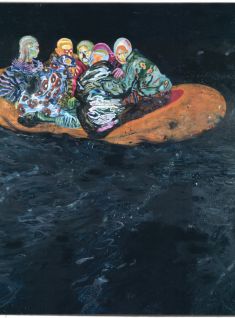 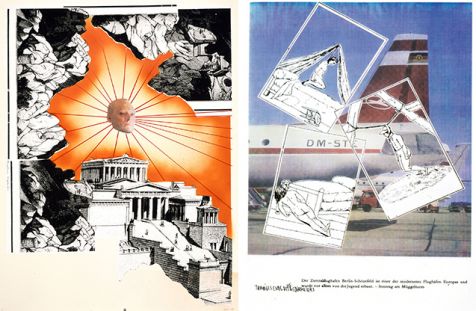