A photographer-turned-graffiti artist and painter, Curtis Kulig is best known for his iconic campaign featuring the words “Love Me” in mixed-media cursive, spray-painted onto the streets and rooftops of New York, Los Angeles, Paris, and Tokyo, and produced in the form of prints, canvases, and stickers. What began in 2005 as a personal sentiment has quickly evolved into an icon, with his simple, impulsive, two-word manifesto. In recent years he has worked on commercial commissions from Nike, Bobbi Brown, and Converse, among other renowned brands, and on collaborative projects with fellow street artists Shepard Fairey and Skullphone. He also produces portrait and lifestyle photography — primarily of the urban skateboarding scene - 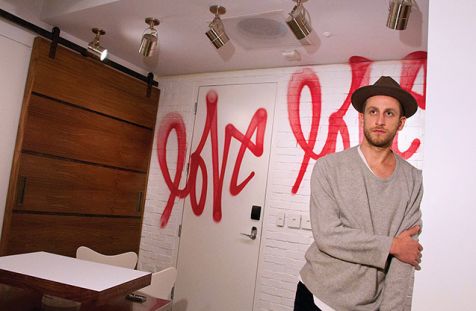