The documentary film “The Gates” follows one of Christo's and Jeanne-Claude's most interesting installations, the well-known orange fabric-gates in New York's Central Park. But the film also shows the incredible amount of preparation by the artist couple. For 25 years they researched and talked to politicians and sponsors before “The Gates” was finally realised in 2005. While the film documents the conception and construction of the over 7000 gates, it also shows the visitor's different, often controversial reactions to the changes in central park. This is what fuels Christo and Jeanne-Claude's projects: the interaction with the visitors. The reactions range from admiration and amazement to indifference, disapproval and even vandalizing.

Christo and Jeanne-Claude met in Paris in the late fifties. During their 50 years together – Jeanne Claude passed away in 2009 – the artist couple wrapped trees, bridges and public buildings. One of their first famous projects is their participation at the Documenta 4 in 1968. Here, they installed the “200 000 Cubic Feet Package”, an 85 meter high column of air. Three years later they worked on their “Valley Curtain” a 400-feet-long curtain through a Rocky Mountain Valley. In 1983 they succeeded to create one of their most spectacular projects, the “Surrounded Islands”. With the help of more than 400 helpers they surrounded eleven islands offshore Miami Beach with swimming, pink plastic foil. The artist couple veiled the Reichstag in Berlin in 1995.

Christo and Jeanne-Claude have largely financed their projects themselves, among other things with the sales of their sketches and models. It is crucial for their way of making public installations to emphasize the different states of a situation and the resulting paradoxical experience: something that is veiled and thus can't be seen, is especially interesting. The question that comes up inevitably is what happens between the before and the after? Do the installations have the power to permanently change the perception of a place? Projects like the veiling of the Reichstag in Berlin and "The Gates” in Central Park confirm, that certain buildings and places can indeed newly enter the collective memory.

You can buy works by Christo and Jeanne-Claude in our shop.

Surrounded Islands, 1983 - AVAILABLE IN OUR SHOP 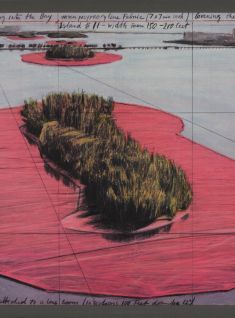 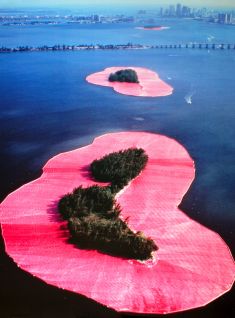 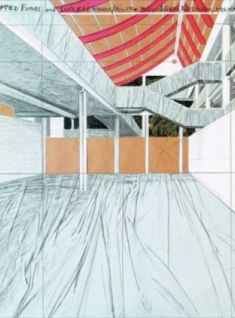 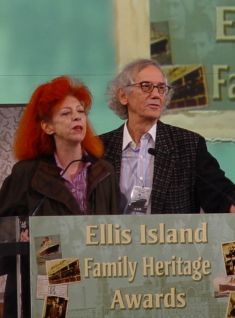