Although he is not widely known for his creative vein, painting in watercolours belongs to one oft he hobbies of the Prince of Wales. His watercolours show the beautiful royal homes, Balmoral, Sandringham, High grove and Windsor Castle, together with landscapes of the Prince's favourite places, including Yorkshire, Greece, and Scotland which capture the Prince's love for the natural beauty of the countryside wherever he is. These limited edition, signed lithographs are sold to raise money for the Prince of Wales's Charitable Foundation.

Charles Philip Arthur George Mountbatten-Windsor, Prince of Wales und Duke of Cornwall (*1948 im Buckingham Palace) is heir apparent of Queen Elizabeth II. He is the eldest child of Queen Elizabeth II and Prince Philip.Also architecture and the conservation of historic buildings belongs to his hobbies. Prince Charles published a book on the subject called A Vision of Britain in 1989.

Prince Charles started his studies of Archeology, Anthropology and History in 1967. After earning a bachelor of arts degree from Trinity College, Cambridge, Charles served a tour of duty with the Royal Navy from 1971 to 1976.

You can buy works by Prince Charles of Wales in our shop.

Wensleydale, 1992 - AVAILABLE IN THE SHOP 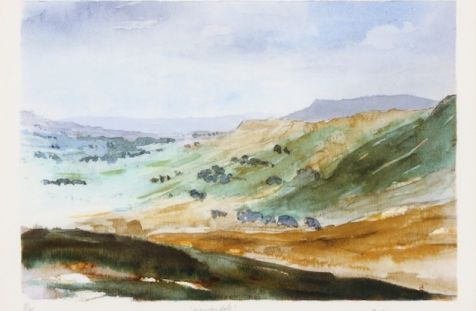 Sandringham, 1992 - AVAILABLE IN THE SHOP