Antoni Tàpies was born on Dec. 13, 1923 in Barcelona. Today this Catalan is one of the most renowned contemporary artists. From his Surrealist beginnings, he moved on to become an advocate of Informal Art, Conceptual Art and Arte Povera. Tàpies works in his own unmistakable artistic language: his paintings consist of signs and traces, of evidence, reduction and assemblage. Antoni Tàpies' began law studies. A heart and lung disease brought him to visit a sanatorium in the mountains in 1942, where he began drawing. Short study period at the Nolasc Valls Art Academy. Dedicated himself fully to painting after 1946, quitting law school. Studio on Carrer Jaume in Barcelona. In 1947 he met the poet Joan Brossa and the collector Joan Prats, a friend of Miró's. 'Dau al Set' was founded. First exhibits. Stipendium from the French Government: year-long sojourn in Paris. Involved with the emerging Tachisme movement and Informal painting (1950-51). Traveled through the USA. First paintings with impasto application of paint and addition of cement and sand (1953). Tàpies met the writer Michel Tapié (1954). His puncturing and cutting up of the canvas or support led to scandal. The step from painterly space to objet d'art was taken and he moved towards Conceptual Art. Soon Tàpies begins using cardboard, strings and unusually poor materials for his scholarly search, Arte Povera finds its way into his works. At the same time, in 1959, Sala Gaspar in Barcelona published his first lithographs. Printing became an important medium for him. The elementary forms of his paintings appeared in his lithographs as well as in his etchings, the dark grounds, impressions, traces, but also classical signs, numbers and letters. Tàpies wholly commited himself through his work for the freedom of artistic expression as well as of Catalonia and its culture. His essays in biography and art criticism are excellent reflections of Tàpies' spiritual stance. They constitute one of the most distinctive collections of writings on art of our times and at the same time reflect the core of Catalan spiritual life (cf. Editions Erker Verlag, St. Gallen). Exhibits throughout the world, honors and awards acknowledge his work. In 1987, the artist founds the Fundació Antoni Tàpies in Barcelona, with its spacious museum and its East Asian Library. The foundation publishes descriptions of his works and writings by the artist. It also runs its own printing workshop

The artist follows an inner rigor evident in all his stages of painting. It is this rigor which allows his spontaneity complete freedom. Fed by the material concepts of Dadaism and Surrealism and strengthened by the contemporary, loose gestures of Tachism at the beginning of the 50's, Tàpies felt compelled to take a step forward within Informal Art. Tàpies describes his friendship with the writer and art theoretician Miguel Tapié as one of his most fruitful experiences in his development as an artist. A great many other friends could be mentioned, with whom Tàpies held a decisive interchange of ideas, from the people of the Maeght Gallery to Miró and the ceramist P.L. Artigas.

It seems too superficial to simply remark that Antoni Tàpies' art in the 60's caused a sensation through his incorporation of objects, unexpected materials such as straw, dirt, fluff, cardboard, graffiti, jute sacks, items of clothing, cords, strings and rags. To attempt to understand his art, it would perhaps be wise to take the following advice: Walk though the sand, then turn around to see the trail you've made, consciously realize the transformation of the material, and see how the material speaks for itself.

What Tàpies creates in his paintings is an encounter with matter, dug-up traces of life. The painting becomes a field of vision, the panel becomes an object. What is being communicated is simply what is: straw is straw, numbers are numbers, the rough surface remains a rough surface. The painting's composition had no end in itself, it did not lead to the game of aesthetics. Whenever beauty played a part, then it had snuck in through the back door. As Tàpies himself said: 'Questions of balance play a role, but never questions of harmony.... Forms should resemble their original natural rhythms.' Or in other words: 'Where painting follows the currents of Tao ...'.

The meaning lies in the objects - appearance is theirs to retain or discard. The letter has long since given up the desire to be part of a word. The letter S becomes a double curve, a loop, the load-bearing T with its crossed lines becomes the most likely pictorial concentrate of a code language being formed. And that is one of the most decisive aspects of Antoni Tàpies' work: the formed comes casually into dialogue with the unformed. The composition is secondary, a simple derivative of this continuous encounter among matter. And this is where some part of the alchemy, mysticism and wisdom of all cultures jumps onto the paintings and into our everyday experience and, quite in the artist's style, he quietly transforms it.

SUITE Variations I - XI - Available in our shop 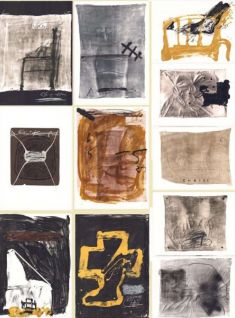 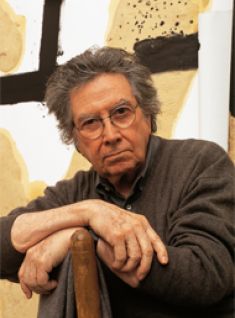 Dentelle - Available in our shop 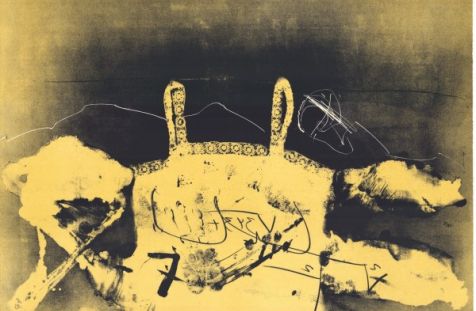 Bouche - Available in our shop 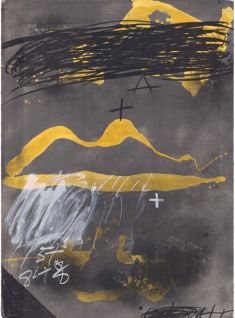 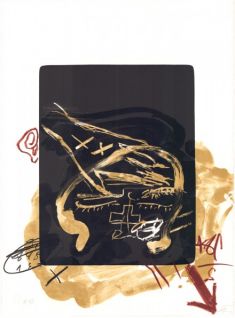