With his provocative furniture sculptures the British Pop Art artist Allen Jones (*1937 in Southampton) caused quite a furore all over the world in 1969. The infamous “sadomasochistic sculptures” are named “Table”, “Chair” and “Hatstand”; they are made from busty mannequins, scantily clad in patent leather. As late as 1978, when the objects were exhibited in the London Institute of Contemporary Art, they were attacked with smoke and stink bombs and in the Tate Britain the “Chair” was damaged with acid in 1986.

The submissive appearance of the female fibreglass dummies caused a wave of indignation from the start; Allen Jones was accused of being sexist and depicting women as undignified, mere willing objects of lust. Jones obviously never intended to show women in such a way, he wanted to question prohibitions and moral boundaries. “Nothing is as it seems”, the artist once said and also in this case one should not confuse the appearance of the object with its message. With his objects the artist carries trivialities like sexual connotations from advertising and show business into fine art to stylize and satirize them.

Allen Jones studied at the Hornsey College of Art and the Royal College of Art in London (1955-60), among this fellow students were R.B. Kitaj and David Hockney. Jones discovered erotic references for his art early on – a product of the zeitgeist as he told the “Telegraph” in 2007: “I was living in Chelsea and had an interest in the female figure and the sexual charge that comes from it. Every Saturday on the King's Road you went out and skirts were shorter, the body was being displayed in some new way. Any you knew that the following week somebody would up the ante.”

Allen Jones moved to New York for two years in 1964; here his art was heavily influenced by motifs from fetish magazines, he later also discovered sculpture as a way of expressing himself. Several years after the controversial furniture he created “Secretary” (1972) – three lasciviously crossed pairs of legs in laced boots. Allen Jones accepted numerous lectureships at art academies, among others in Hamburg and Berlin. Allen Jones participated in the documenta III (1964) and the 4th documenta (1968). In 1979, when he was 41, the artist was dedicated his first retrospective shown in Liverpool, London, Baden-Baden and Bielefeld. In 1986 he was voted into the Royal Academy of Arts as a full member. His 70th birthday was celebrated in the Tate Britain in 2007 with a show of mainly current works. An extensive exhibition for his 75th birthday took place in the Kunsthalle Tübingen. Allen Jones lives in London.

After more than forty years the reception of his art is a lot more relaxed, yet it still has the potential to polarize. The appreciation has not waned: As recently as 2012 a set of furniture sculptures from the estate of playboy Gunter Sachs was auctioned by Sotheby's for the hefty price of 2,6 million British pounds.

You can buy works by Allen Jones in our shop. 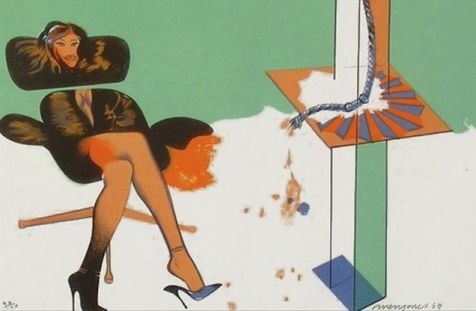 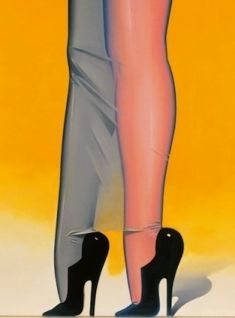 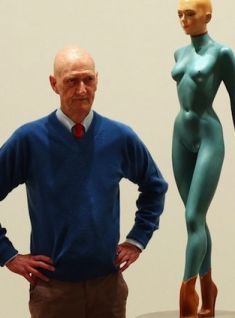 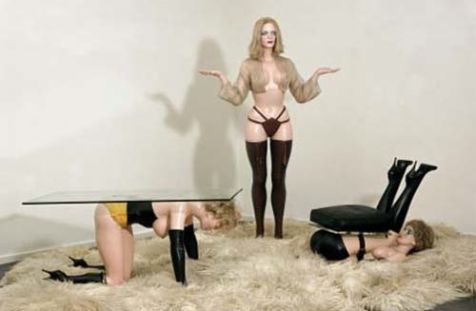