The American artist Alexander Calder was born in Philadelphia in 1898. He studies engineering from 1915 to 1919 at the Stevens Institute of Technology in Hoboken, New Jersey. He takes drawing courses with Clinton Balmer in New York in 1922, and studies at the Art Students League from 1923-25. Calder works for the magazine "National Police Gazette" as of 1924. For two weeks in 1925, he attends the daily show of a travelling circus in New York.
In 1926 Alexander Calder moves to Paris where he studies at the Académie de la Grande Chaumière. This is where he makes first small figure of wire, wood and cloth. In spring of 1927 he sets up a complete miniature circus with these figures, and performs shows that are visited by many Parisian artists. His miniature wire figures are on exhibition in the New Yorker Weyhe Gallery in 1928. His first one-man show takes place at the Paris Galerie Billiet-Pierre Vorms in 1929.
In 1930 Alexander Calder joins the artists group "Abstraction-Création". He increasingly deals with abstractions. A visit to the Paris observatory is a major inspiration for his first mobile and abstract wire sculptures, for which Marcel Duchamp comes up with the term "Mobile".
Alexander Calder presents these "Mobiles" in the Galerie Vignon in Paris in 1932 for the first time. In these "Mobiles" Calder has found his very own and most appropriate form of art. The perfectly balanced constructions, moved by a touch of air, are made of metal elements, wires, threads and sticks, they become more complex and abstract over the years, however, their impression is always one of great poetry and playful airiness. In the beginning he also makes constructions that are moved by a small motor, but Calder does not pursue this type of "Mobile". As counterparts to the "Mobiles", Alexander Calder also makes immobile, tectonically heavy, partly monumental constructions of sheet metal, for which Jean Arp invents the term "Stabile".
In 1933 Alexander Calder buys a farm house in Roxbury (Connecticut) and return to the USA with his wife Louisa James. In 1934 he creates the first open air mobile that he calls "Steel Fish" which is 3,5 meters tall. Besides sculptures, his oeuvre also comprises graphic art and gouaches. Additionally, he makes jewelry, stage designs and book illustrations.
Alexander Calder dies in New York in 1976. His grave is in Roxbury. 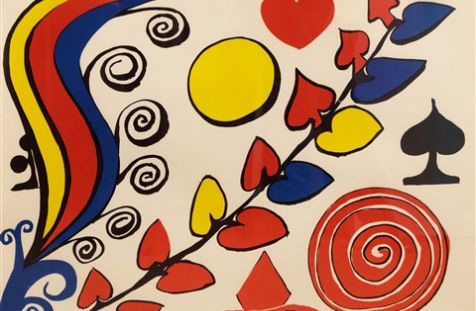 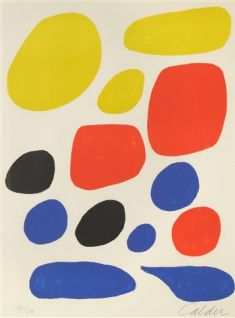