Identity and desire in the 21st century make up the core of this work. These photographs form a narrative about personas created to pursue the most basic of needs; love and intimacy.

In this ever-changing world of communication, the internet has put a new twist on the search for love, with personal ads transforming into modern day versions of the love letter. I delved into the notion of identity, by photographing those who posted self-advertisements on the web, sharing intimate details of their lives to a network of unknown web suitors. In a sense, their ads become a digital love letter; an anonymous shout to anyone who will listen. This genre of communication compelled me to explore the concept of how we imagine, and thus describe ourselves, versus how others perceive us.

This project began after reading several postings with idiosyncratic titles that piqued my interest. Headings like "Scary and Damaged," "Rock My Gypsy Soul" and "I Want More than Sex" quickly had me hooked, clicking ad after ad to see what the next person had to say about him or herself. Many of the ads seemed sincere and honest. Some were wonderful inventions of identity, while others involved degrees of fantasy. Subjects were selected in Denver, Dallas, Chicago and Las Vegas based purely on their words posted on the Internet. I purposely chose not to see their photographs before meeting them to create an element of surprise, to see if my mental picture of them would match the person who arrived at my studio for the sitting.

No direction was given to the subjects other than requesting that they wear their favorite shirt. The concept was for individuals to present themselves in their own way, as if being photographed for a prospective suitor. The composition is devoted almost entirely to the subjects face which often serves as a facade from which the soul peers out, and in the world of attraction carries much importance. Deliberately reducing the frame to the most elemental, perhaps an inner truth is revealed in the corner of a mouth, the lift of an eyebrow, or the dip of a shoulder.

Using a 20" x 24" Polaroid camera larger than my subjects and adding black side panels to envelope them, the sitting area became a confessional space, allowing each person privacy to reveal him or herself. The camera resolves extraordinary sharpness at the point of focus, in this case the eyes, resulting in prints which allow the viewer to experience a deeper connection. An additional layer was added to the work by having each person articulate his or her "advertisement" into a digital voice recorder just prior to the session. For some, the words came easily and were seductive while other rushed through, straining with a visceral discomfort. This recitation also helped to remind them about who they said they were and what they were seeking. Moments before creating the photograph, I whispered "Think about the person you want to meet" which brought their primal feelings to the surface. 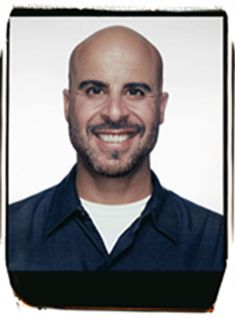 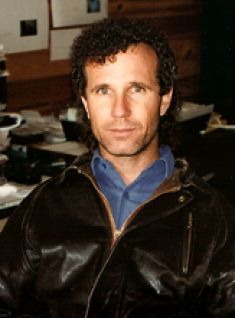 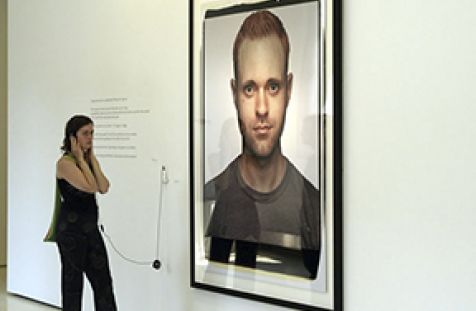